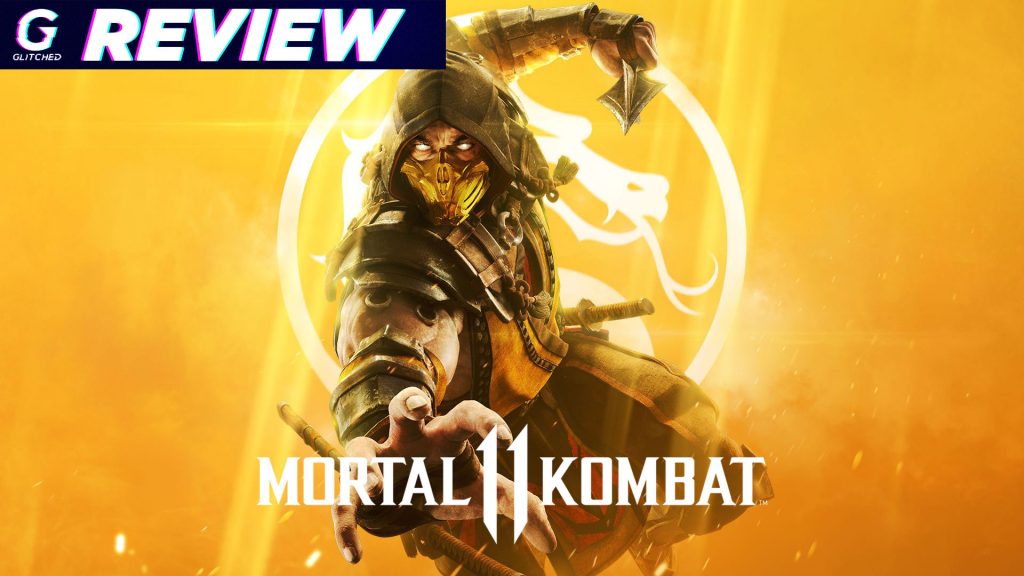 NetherRealm have completely outdone themselves with Mortal Kombat 11, creating the most brutal, utterly fun and deep game in the franchise to date. It just has to be said…Mortal Kombat 11 takes everything I love from the famed franchise and turns the dial up to 11 to create an experience that you will be able to enjoy for years to come, even if it does feel a bit grindy.

RELATED: Mortal Kombat 11 Guest Characters we Would Love to See

If you would rather watch the game and all its gore and blood in action instead of reading, then check out our Mortal Kombat 11 review video below.

At the heart of Mortal Kombat 11 is its story mode, pushing the boundaries of what we’ve seen in fighting games in the past. The story mode is as over-the-top as one would expect from the Mortal Kombat franchise with crazy action scenes fit for a cinematic experience, combined with the fantastic combat in between.

The story mode took me roughly 10 hours to complete on medium difficulty and every moment was crazy, from Johnny Cage meeting his younger self, to twist and turns along the way. For example, good old Briggs gets turned to the dark side as he tries to protect his daughter, but his younger self helps him see the light once again. Unfortunately, the story was a bit confusing at times, as it revolves around a character called Kronica who mashes timelines together with the goal of resetting events and getting rid of the Earthrealm’s protector, Raiden.

At first, it was difficult to make sense of it all but the further I got into the story mode, the more things just clicked. You do have to be somewhat of a Mortal Kombat super-fan to understand all the references dropped during the story, but even if you aren’t, you can just sit back and enjoy all the gory action. It is one awesome and sometimes confusing ride that will keep you on the edge of your seat. 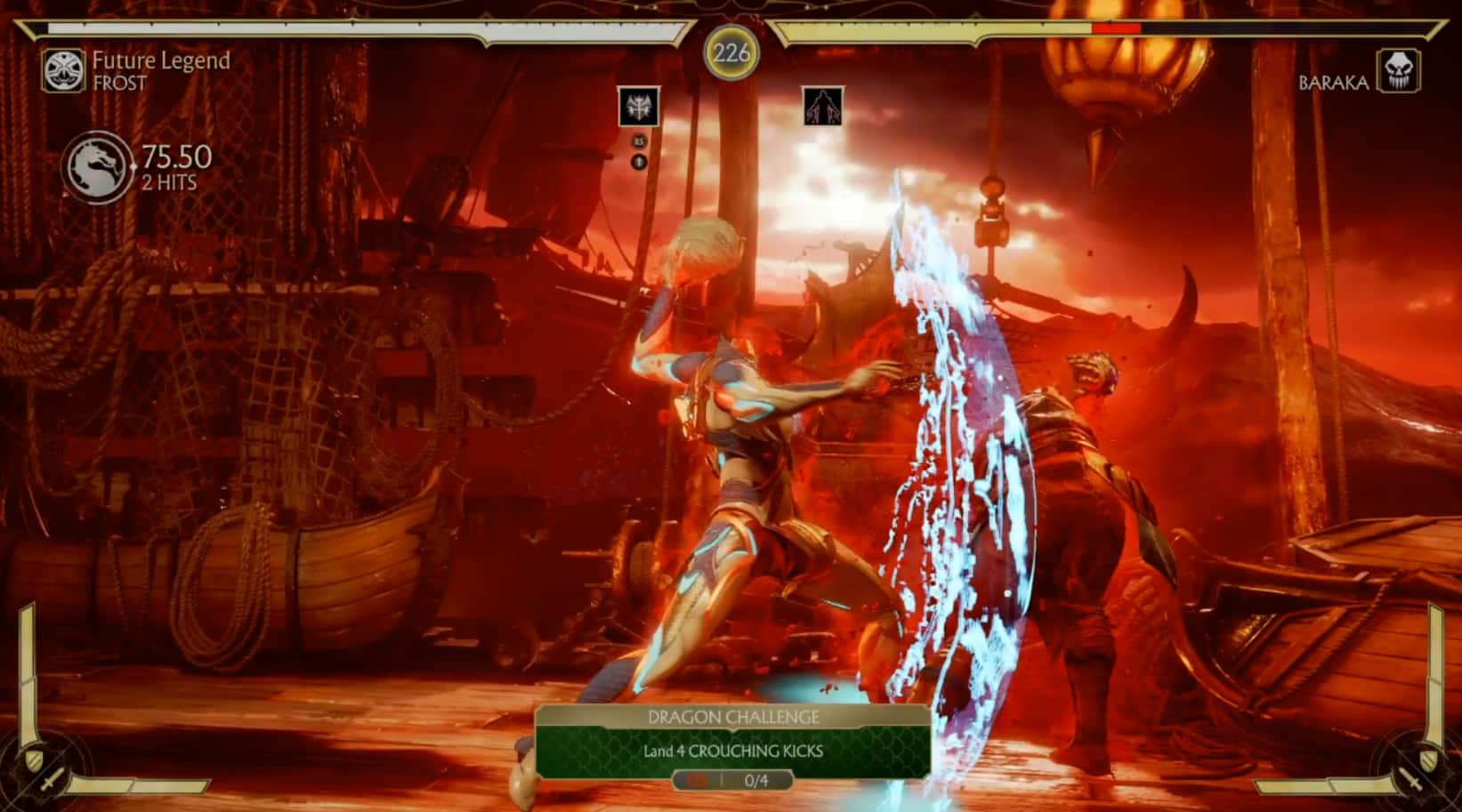 Completing the story allows you to unlock Frost, my favourite Mortal Kombat 11 character, who literally uses her own head to punch others in the face. You also get introduced to Cetrion, an Elder God, as well as Geras and more. Some series favourites also make a return after being killed off in Mortal Kombat 9, such as Liu Kang and Shao Kahn, the latter being a pre-order bonus. Throw in series staples such as Sub-Zero, Raiden and Scorpion with a total roster of 25 characters and you have a huge variety of kombatants to choose from. There are also 21 unique levels that you can stain with your enemy’s blood, which means that even after 40 hours the gameplay still felt fresh.

But variety in levels and kombatants isn’t what makes Mortal Kombat 11 so great. It’s the gameplay that shines through more than anything else and stepping into each battle you can feel how refined the gameplay is. Things are a bit slower than past Mortal Kombat titles, which should be great news for newcomers. 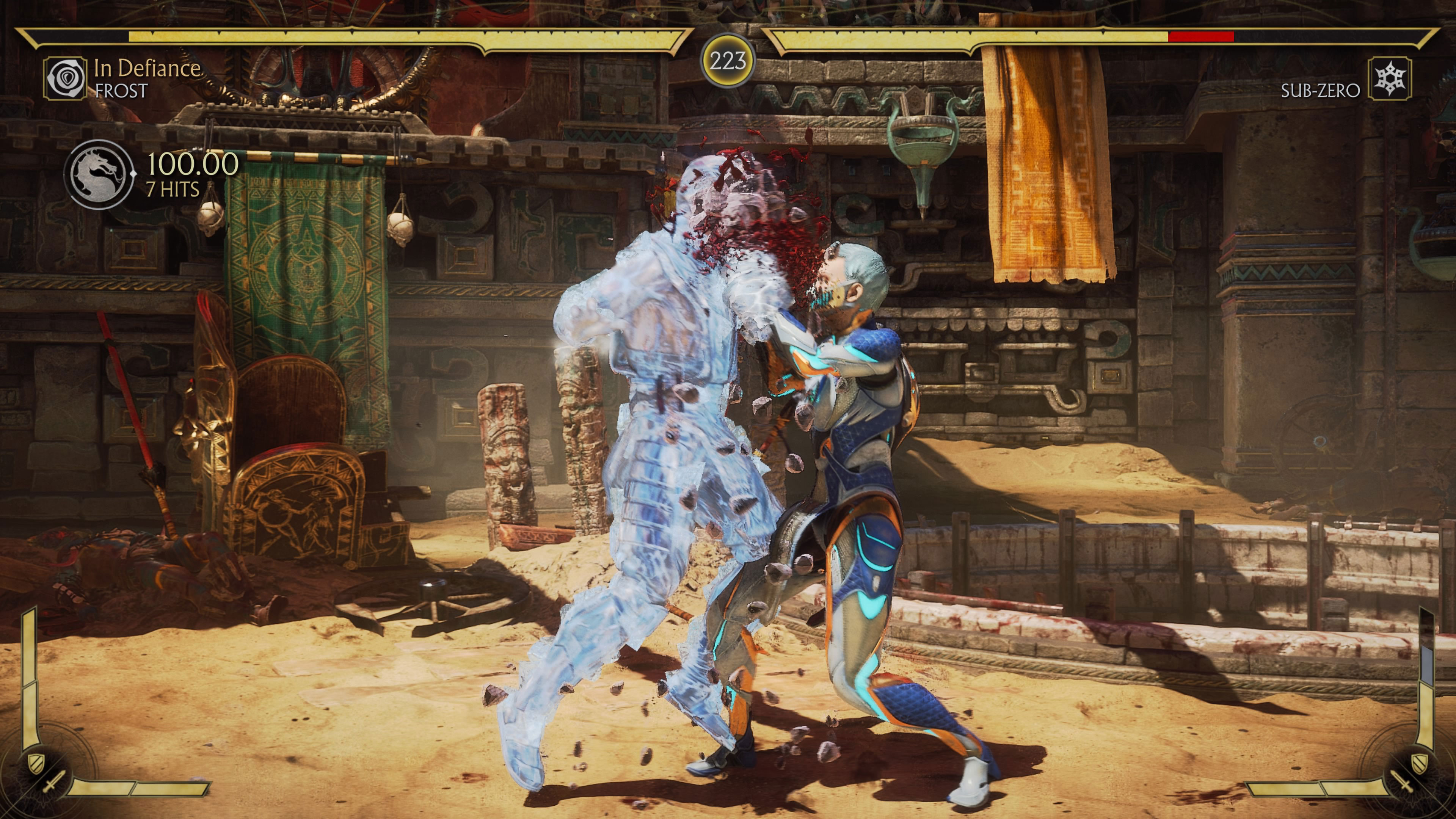 Don’t get me wrong, the game is still extremely difficult to master, but a slower and more grounded approach to combat means that you have a slightly larger window to react and counter an enemy’s attacks. This should help new players, while series veterans will still be able to pull off massive combos and awesome moves to beat their opponent’s face in.

Each character has two Fatalities, from Noob Saibot ripping opponents apart with portals, to Baraka’ brain-eating escapades, Frost’s awesome-looking finisher and D’Vorah utterly disgusting move that kind of looks like a scene out of an Aliens film. Then, we have Fatal Blows, a mechanic that you can use when your kombatant drops to low health. This helped me get back into a fight that was surely lost, destroying a large amount of the enemy’s health by pressing two buttons together at the right time and place. 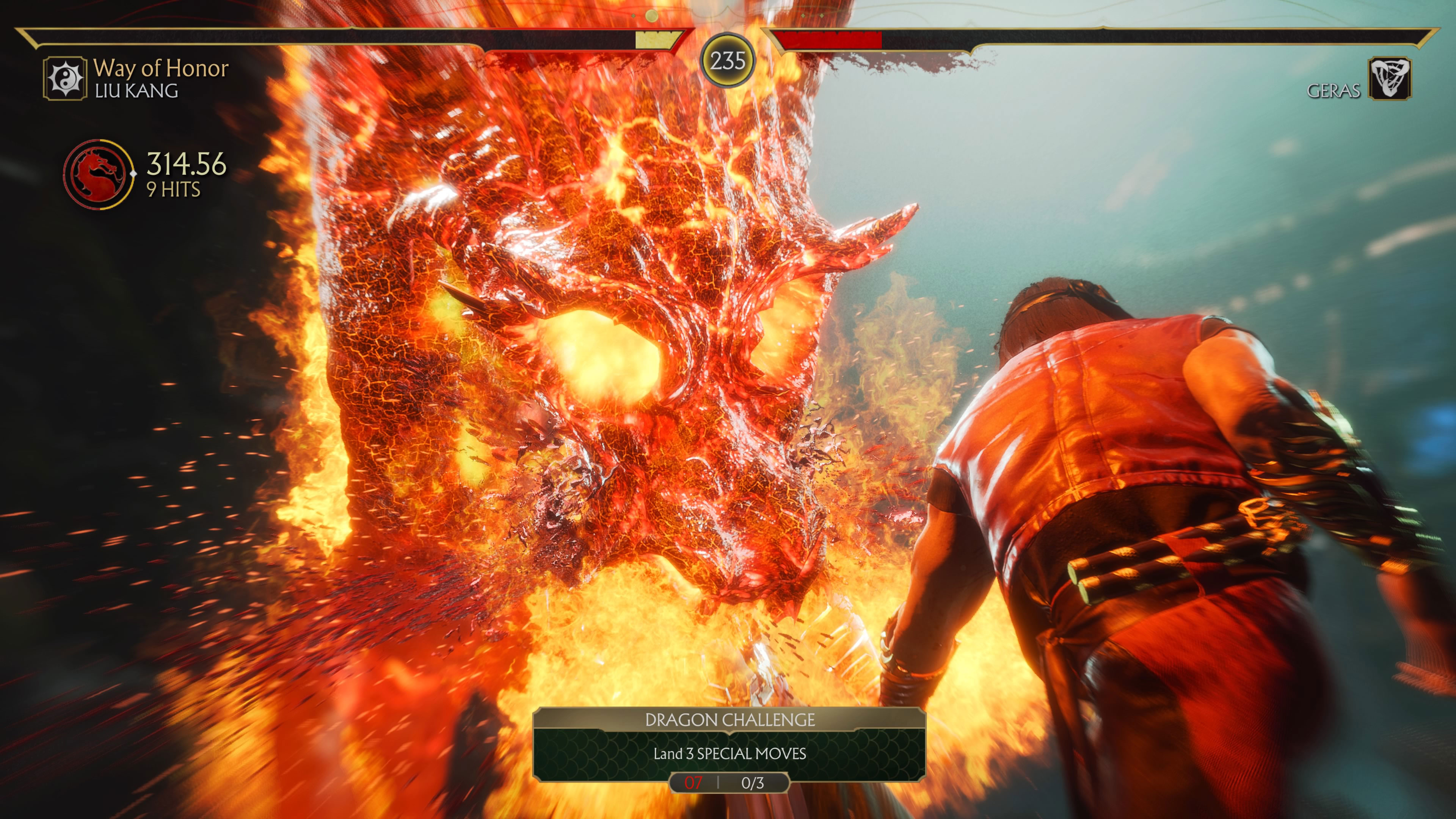 The Fatal Blows can only be used once per match, so using it strategically can help you overcome a difficult opponent, especially if they have already used their Fatal Blow. This helps newcomers feel as if they are doing at least a bit of damage to an opponent and it was a welcome scene in every match, as these Fatal Blows are almost as brutal as the Fatalities themselves. Speaking of Fatalities, each character has two of them, with the second being unlockable, which brings us to the character progression and customization.


Mortal Kombat 11 has an addictive yet grindy character progression system. It took me nearly eight hours to unlock two new Fatalities and roughly a dozen pieces of gear. It is a slow and steady grind which sees you spend three different types of currencies to unlock chests in the Krypt. Let’s say you have a piece of gear you like, such as Liu Kang’s headband. You then have to equip this piece, level it up to unlock Augmentation slots and then find one of the five types of Augmentations that actually fit into this piece of gear. 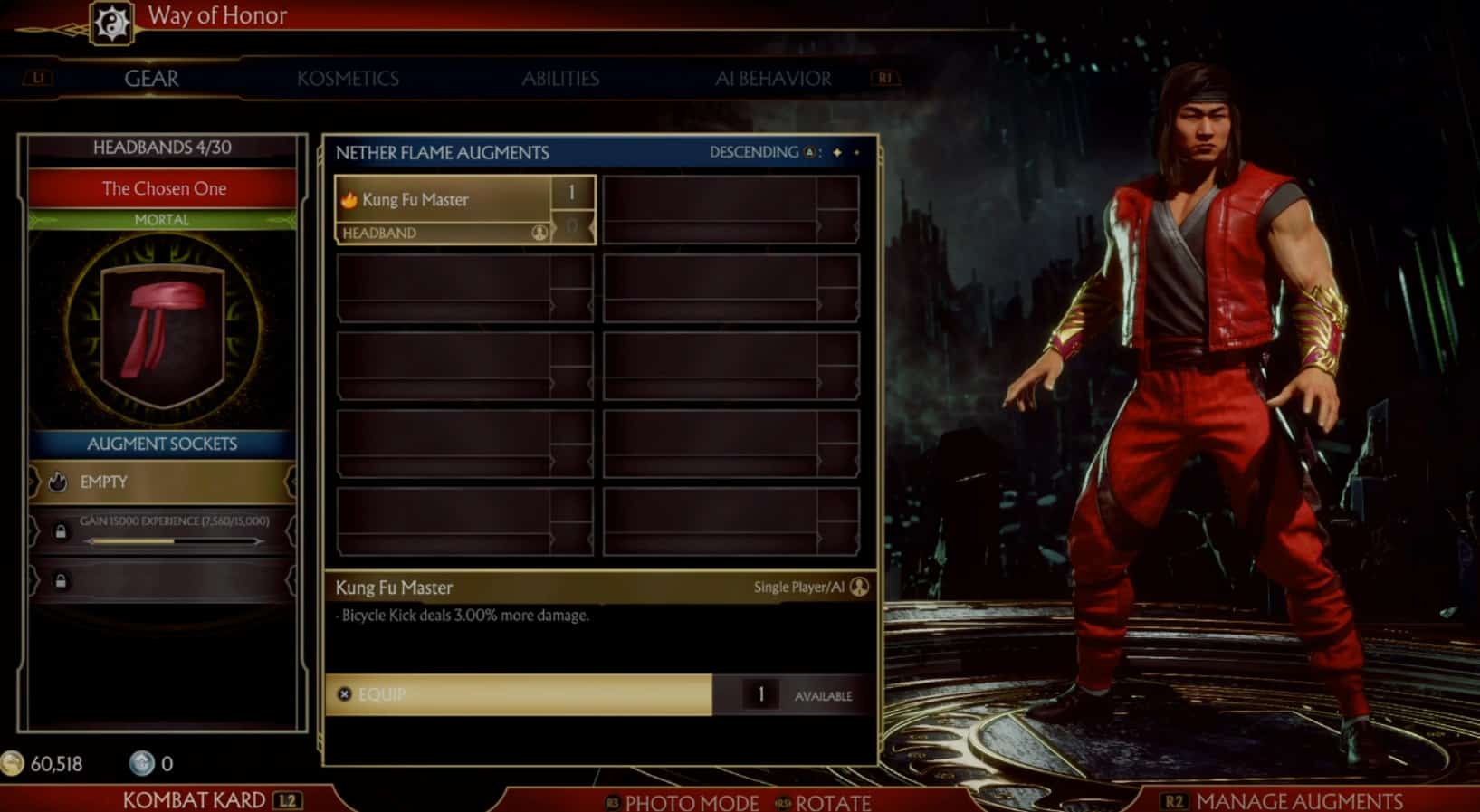 Each piece has two Augmentation slots and just levelling it up takes several hours. Even after I unlocked some slots, I didn’t really have augmentations to insert just yet. Augmentations slotted into gear increase a fighter’s special ability powers, adding, for example, 3% more fire damage to Liu Kang’s attacks, or allowing your fighter to take less damage from big attacks such as Fatal Blows. There is an experience boost option, which you could purchase with Time Crystals. However, the Time Crystal store wasn’t open yet so I do not know exactly how much faster you will be able to level up your gear with some real-money purchases.

That’s the thing with Mortal Kombat 11’s character progression. It feels a bit reliant on luck when you enter the Krypt. The Krypt is a loot-hoarder’s dream, where you walk around and open chests, uncovering its secrets by smashing down walls and much more. You can make offerings for a random piece of gear, find new recipes, craft these recipes at the Forge and much more. Exploring the Krypt feels like a game in its own right, as the sprawling area has so many secrets to uncover. 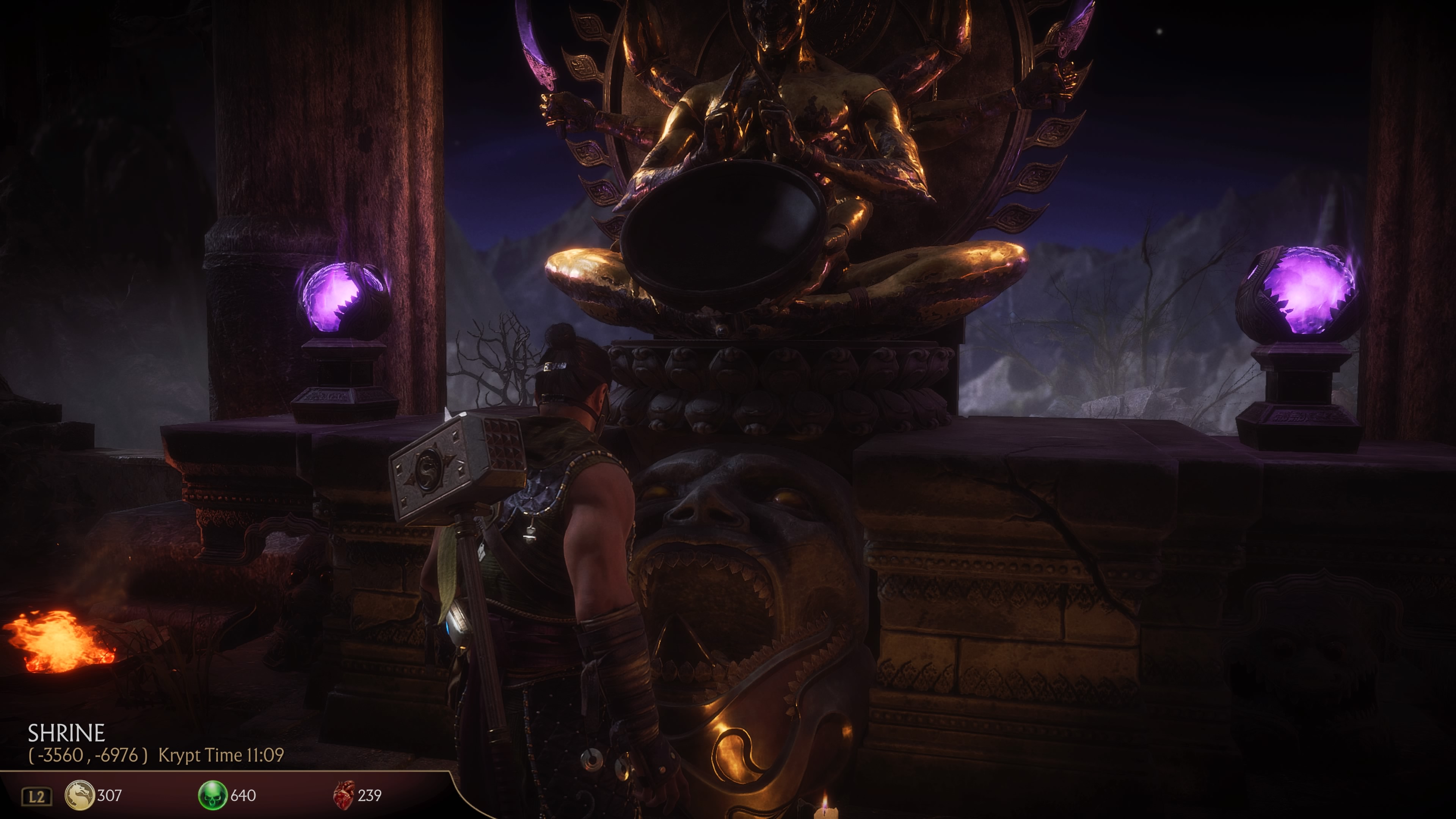 This is where you spend your Kions, Hearts as well as Crystals. Koins are the easiest to come by but after opening roughly 20 chests and receiving less-than-ideal items, we had to go back and farm more. Hearts, on the other hand, take a very long time to gather as you only get a few of them by performing brutalities or fatalities during matches.

With 250 of this currency, you can open chests that hold extra Fatalities. It’s random, however, which means you could spend months farming without getting that one Fatality you want. It’s all very complicated and does take quite a long time to figure out. 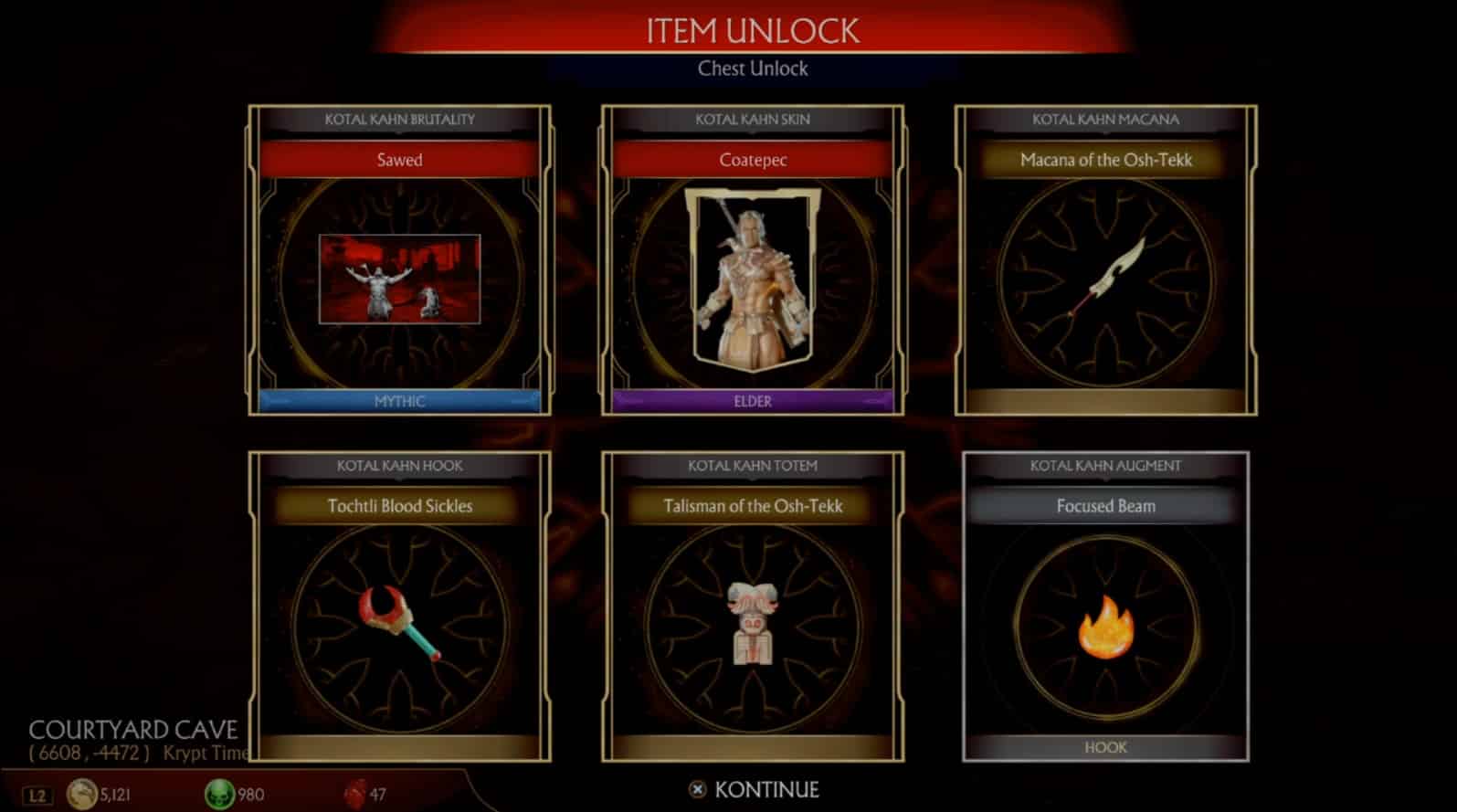 Thankfully, every character already has two preset variants to choose from and all character abilities are unlocked. You can, therefore, customize a fighter with different ability sets without needing to unlock anything. Fine-tuning a character build does take some time and a lot of knowledge of the game, but newcomers can just stick to the presets and level them up as needed, adding some cool cosmetic skins to make your character stand out.

Increasing your character’s power does seem vital to take on some of the more challenging towers. We could stroll through most of the early Klassic Towers, but the Towers of Time do provide massive challenges to overcome. You need to use specific Konsumables in order to make it through, for example, using a Konsumable that negates the effects of Blood Rockets, which is a special condition in some towers. There are dozens of Konsumables that you gain from completing matches, opening chests in the Krypt and finishing towers with a specific score. 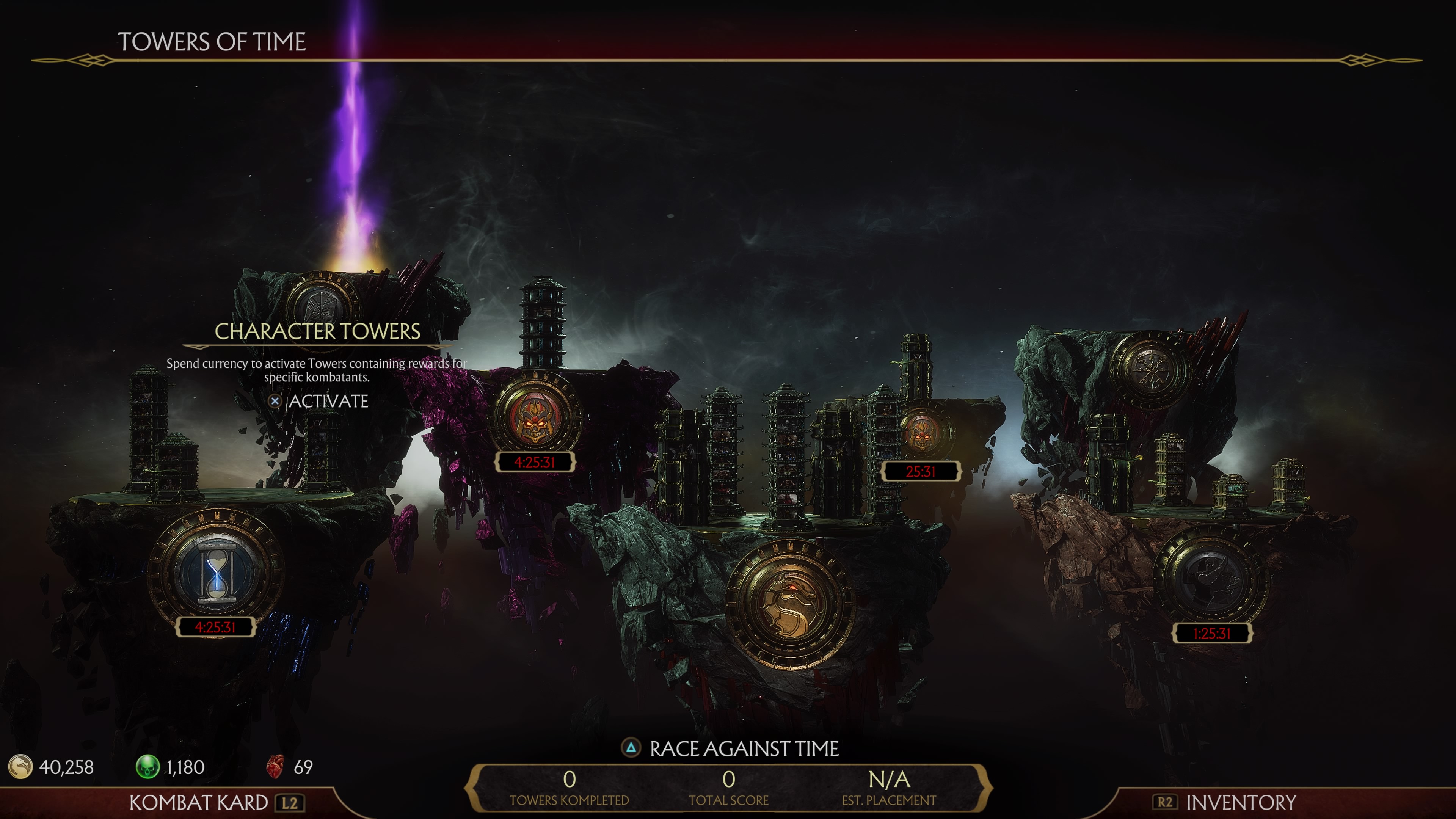 This all leads to an experience with a lot of strategic depth and to make things a bit easier, you can unlock towers by spending a boatload of Koins specific to the character you would like to build up. Things get difficult quite quickly and it can take hours to complete one character tower with a powerful final boss if you aren’t a Mortal Kombat veteran.

So far, I’ve just talked about the single-player experience, but how does the gameplay from South Africa? Well, there’s some very good news for local players. In my time with the beta, things felt a little bit laggy and there was a visible slowdown during some gameplay sessions. That, however, is a thing of the past as every match I played felt extremely smooth and responsive, as you can see me fighting a human opponent right now. Sure, I got getting my ass well and truly handed back to me by some skilled players, but everything about the gameplay is as smooth as I could have ever hoped for. There’s simply nothing to complain about when it comes to the multiplayer and in a month’s time, online tournaments will also start to open up. 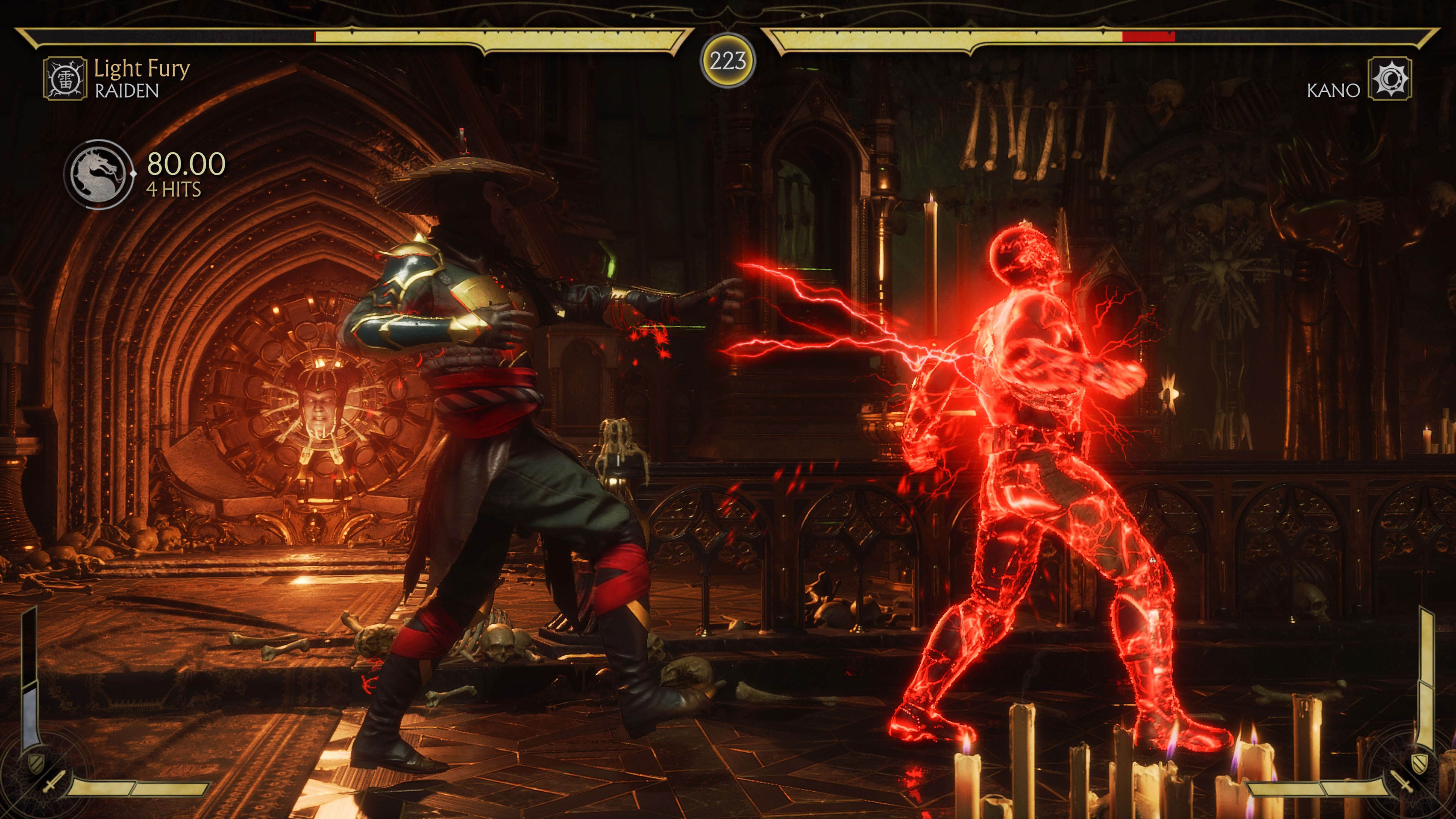 There are even AI battles that allow you to create a team of AI characters to defend and attack other players’ team with. It’s a really cool addition but again, it depends on how powerful your fighters are and how much you and your opponent has farmed.

Speaking of a smooth experience, Mortal Kombat 11 is, in my experience with the game, technically perfect. There were no slowdowns, frame-rate drops, or any visible bugs or glitches. Everything just looks better than the previous game, but what makes Mortal Kombat 11 stand out is how clearly visible and precise characters look. With Mortal Kombat 11, the days of losing your character in the heat of battle are gone thanks to increased character clarity.

Even the UI is more visible thanks to its golden colour scheme. The only small thing that some might think is an issue, is that you do need to be online for character progression, even when fighting AI opponents. 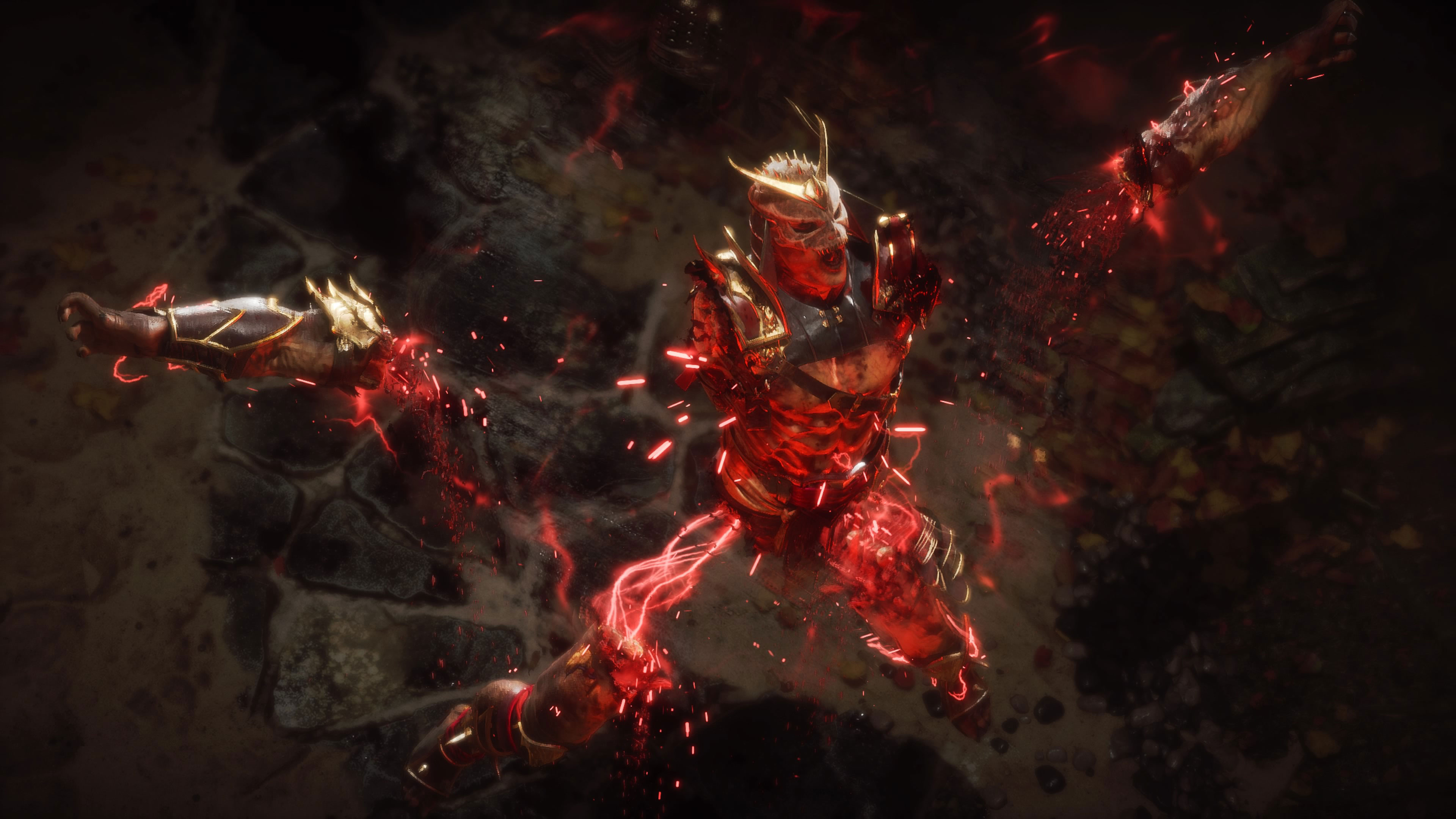 Mortal Kombat 11 is, without a doubt, everything we want in a fighting game. Brutal Fatalities, so much gore, smooth and responsive combat and a boatload of content that can keep you busy for months, if not years. Combine all this with deep character progression and the fact that there is always something to unlock, and it is clear that NetherRealm has created a champion for Earthrealm and beyond.

However, the story does feel a bit disjointed and confusing at times. The character progression feels way too slow and random. To unlock anything worthwhile, you will have to spend upward of a dozen hours farming Towers and open a tonne of chests in the Krypt. During the review period, the Premium Store where you could purchase items with Time Crystals (which can be bought with real money) wasn’t active. However, the developers have said that this will be cosmetic only purchases and things like Easy Fatalities. There should be no pay-to-win aspect but there could be some form of XP boosts, which explains why the character progression is so slow in the first place.

This review is based on a review code sent to us by Warner Bros. Interactive Entertainment