The Gigabyte AORUS FI27Q-P gaming monitor is a well-rounded display with some pretty great features and specs.  At the same time, it is quite a pricey display sitting at R14,999 or $449. There are definitely cheaper monitors out there that also boast the same specs but I have to stress how incredible this product is. You get what you pay for here and that includes a fantastic sleek design, super-bright 1440p display and the latest performance specs including DisplayPort 1.4, amazing colour volume and great refresh rate.

Sure, many gamers out there will run when they see the price tag of this monitor but at the same time, why buy a Dell when you can own an Aorus display? Sort of like buying a Golf GTi when you can purchase a BMW. This Gigabyte AORUS FI27Q-P monitor is definitely made for those who are loyal to the brand and want the best 1440p monitor around. It is also one of the few monitors around that can output HDR10 at 165Hz thanks to the DisplayPort 1.4 tech. Keep in mind that if you get the Gigabyte AORUS FI27Q, without the “P”, that has the old DisplayPort tech and is capped at 120Hz with HDR10. 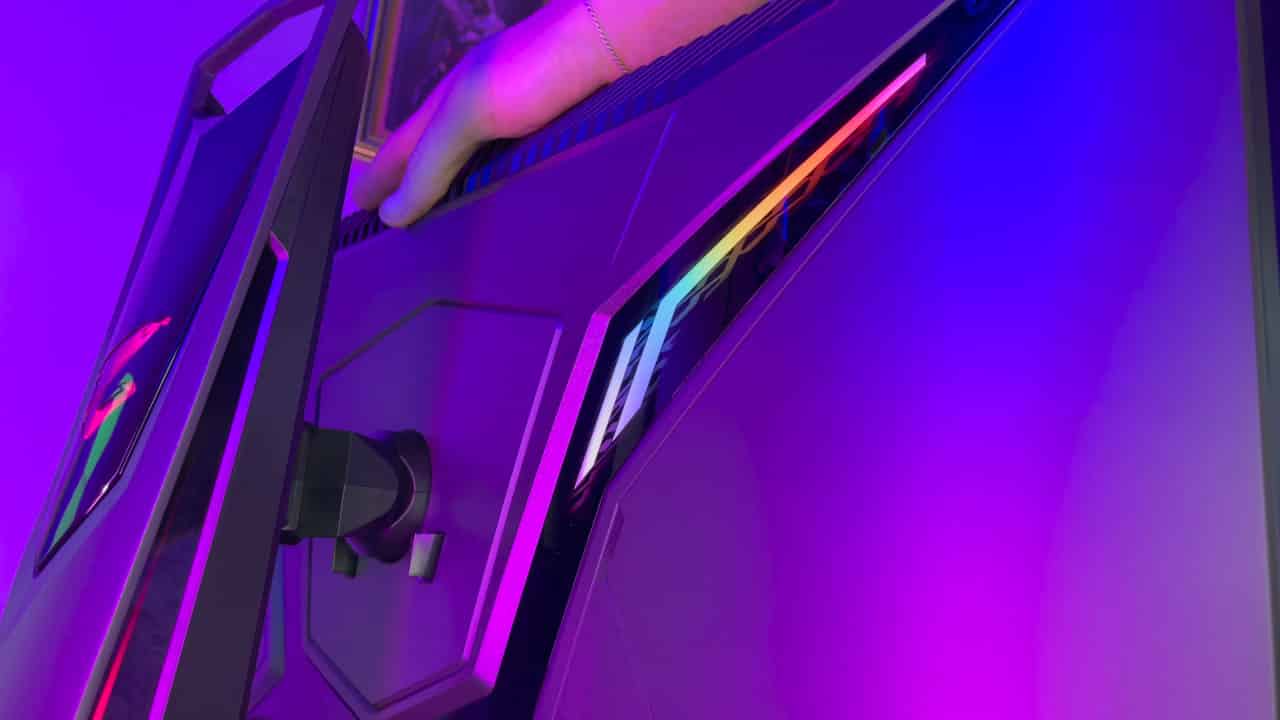 The Gigabyte AORUS FI27Q-P is inspired by wings so the overall design of the monitor includes a lot of fin-like grooves and flair. Most important of all, the main attractions of this monitor are at the back of the display. Gigabyte has included four RGB points of interest including the logo that lights up as well as two wings on each side of the back panel. There’s also a strip of lighting on the display’s arm. On the front of the display, there isn’t much going on which gives the giant 27-inch panel its time to shine. There the AORUS logo that doesn’t light up and a small LED to show the power state.

The stand on the monitor is pretty neat too. It takes up very little space which is great for storing gaming equipment under the panel. There’s a large hole where cables can be fed through for neater cable management too. It doesn’t have the best cable management I have seen on a monitor as the wires are still out in the open but it is not an issue. The stand is quite sturdy with no wobble at all. 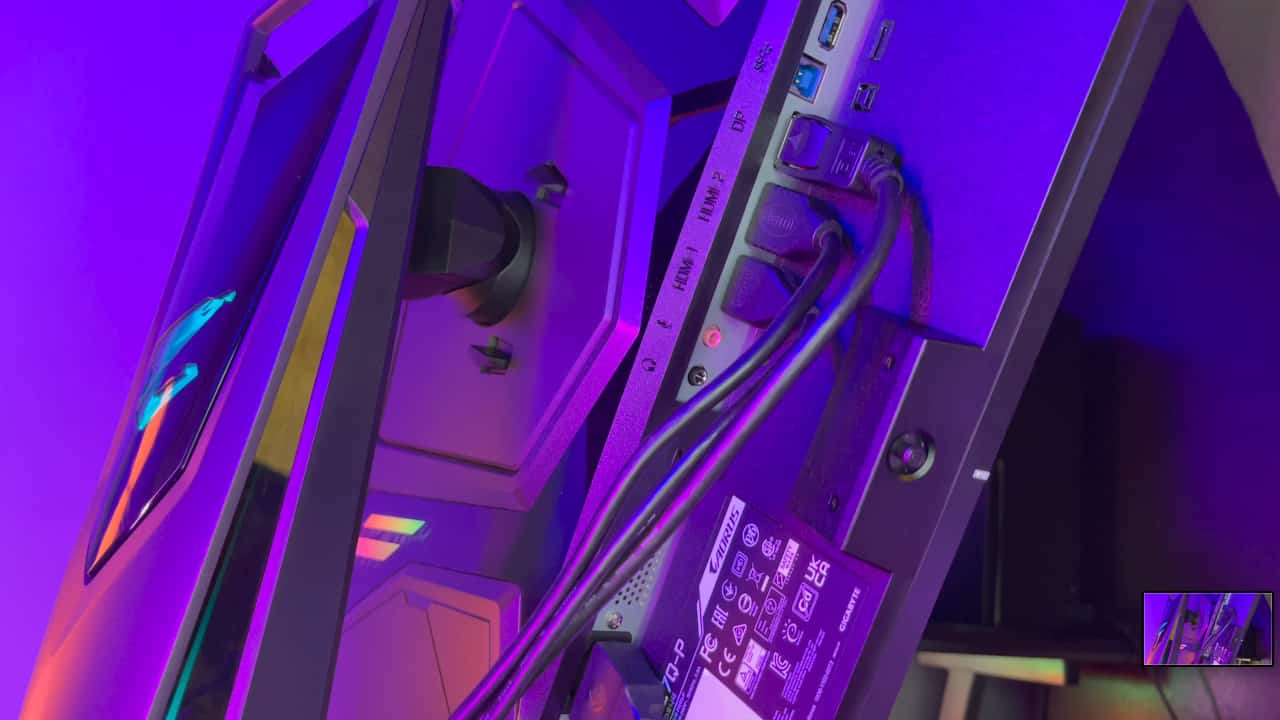 The display is extremely versatile when it comes to its movement. The panel can slide up and down 13cm of 5.1-inches. I could completely rotate the panel too from a landscape position to a portrait mode. It also tilts up and down from a minus 20-degree position to a plus 5-degree position. It can also swivel left and right 20 degrees on both sides. The general movement of the display was easy and I never had to apply any strength in order to move the panel up and down or rotate it. It made adjusting it to my seating a breeze. 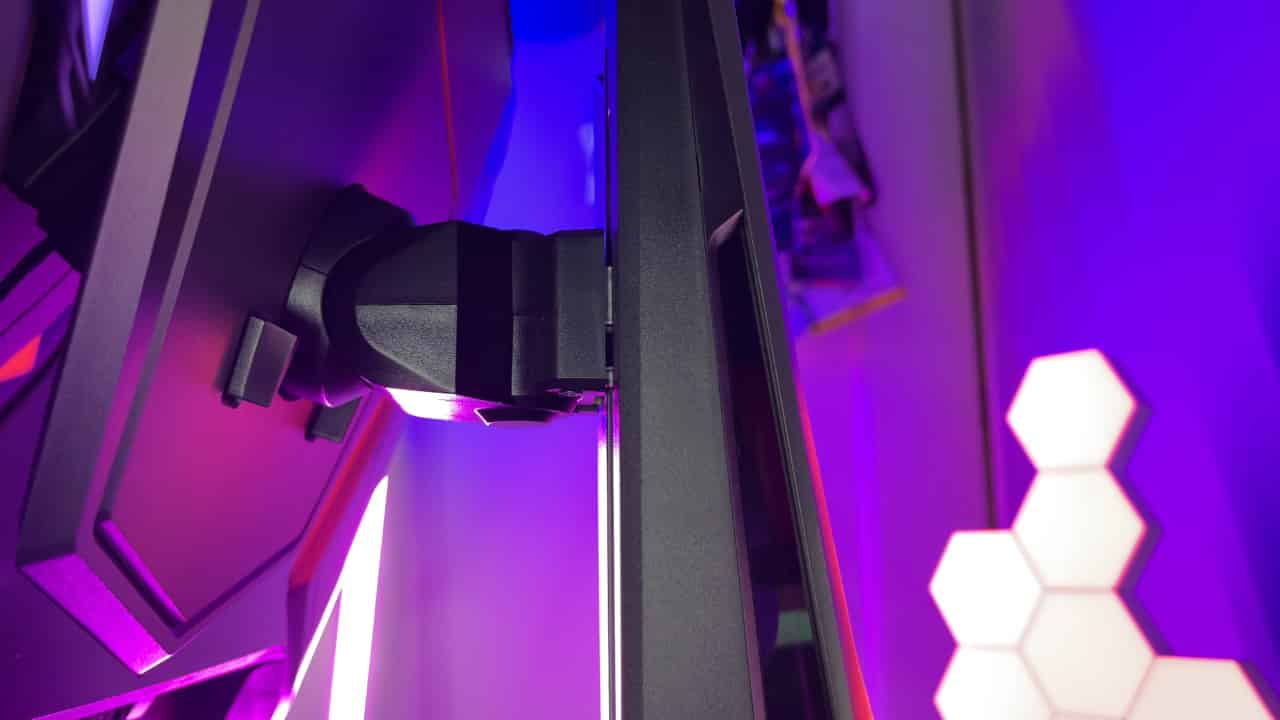 A big selling point of this Gigabyte AORUS FI27Q-P monitor is its Higher Bit Rate 3 support. If you aren’t aware of what this is, most monitors on the market include a DisplayPort 1.2 that can only deliver 144Hz at 1440P with 8-bit colour. If you want 10-bit colour you need to lower the refresh rate down to 120Hz. However, this monitor can deliver 10-bit colour at 144Hz and up. Is 10-bit colour a massive difference? Well, if you look at the graph you can see that when it comes to colours, it does.

10-bit colour delivers a more detailed image and instead of crushing the image and colours, it enables the content to be delivered the way it was designed. If you play HDR content on your TV through HDR 10+ or Dobly Vision, you would appreciate this feature. It doesn’t mean other monitors can’t deliver 10-bit colour, it just means they can’t do it at 144Hz or 165Hz like this Gigabyte AORUS FI27Q-P. 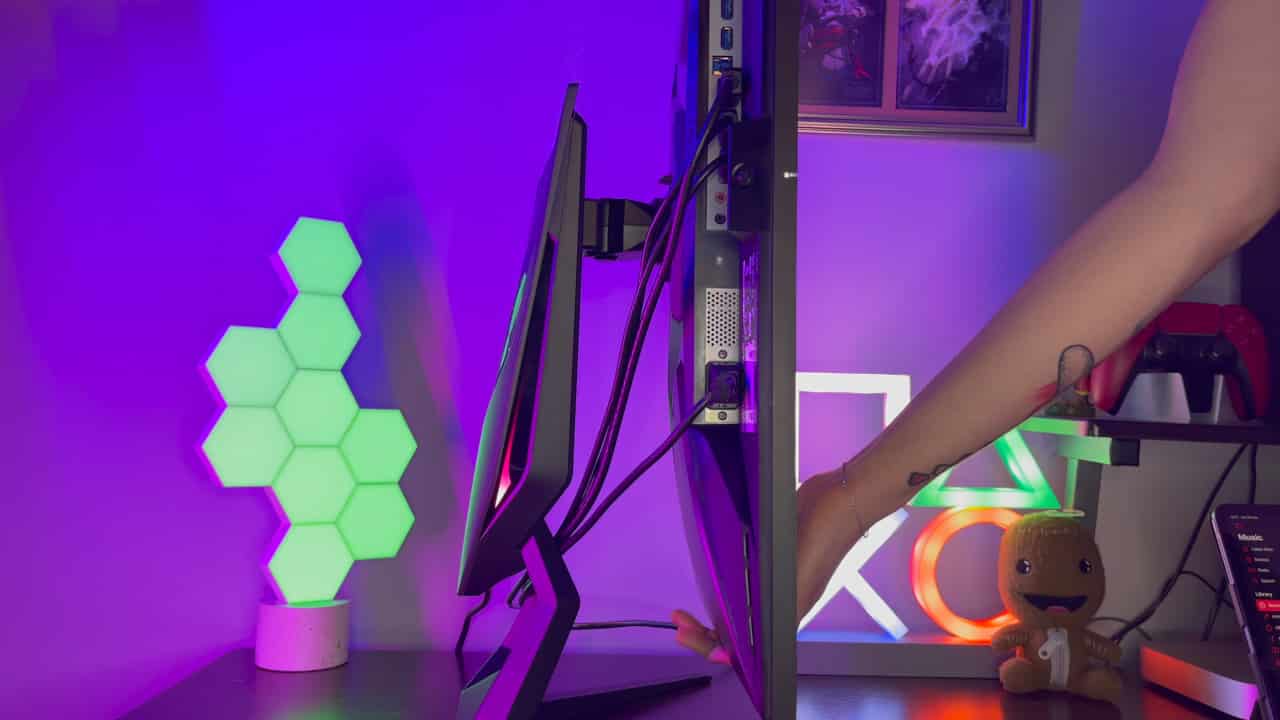 With that out of the way, I need to stress that the Gigabyte AORUS FI27Q-P often felt like the complete package when it came to its features. It has a fantastic refresh rate and all the bells and whistles you would need from a monitor in this day and age. It also felt well-rounded for both PC and console. Given that both the Xbox Series X/S and PS5 boast 120Hz support, this monitor would be a viable option for most gamers out there.

Speaking of Adaptive Sync, ideally, you would want to use this display with DisplayPort for the best output on PC. However, if you’re looking to play on a console then keep in mind the monitor only has HDMI 2.0 so it will cap at 144Hz in 1440p. It also only supports AMD FreeSync through HDMI. In terms of the resolution, on a PC you can enable a 4K resolution of 3840×2160 but it downsamples the image to 1440P. This comes in handy for games and apps that don’t support 1440P. Keep in mind that this downsampled resolution is then capped to 60Hz. 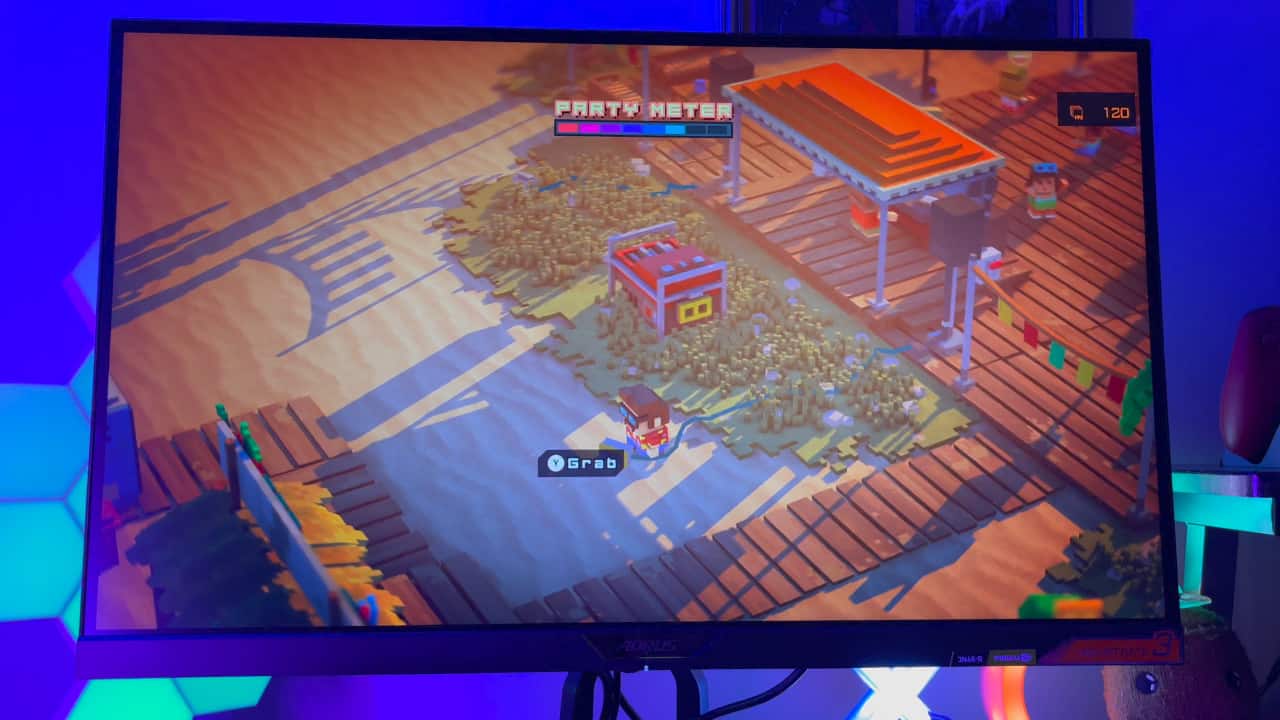 The display itself comes with a range of preset modes that I could toggle depending on what I was doing. There is Picture Mode, Standard, FPS, Aorus, Reader and more. The custom modes let me toggle the settings to my liking by increasing the colour, brightness and contracts. I won’t go into detail on each of these settings as everyone has their own preference. If you’re using the HDR feature on the monitor, most of these settings will also be disabled so it doesn’t really matter in the long run. I often tend to leave HDR enabled. This being for my PC, Mac, PS5 and Series X.

On the technical side of things, the Gigabyte AORUS FI27Q-P delivers a well-rounded experience. SDR brightness peaked at 404 nits in a 100% window and maintained that level throughout testing. The HDR brightness was decent but not amazing by any means. It hit 407 nits in a sustained 100% window and dipped to 399 nits during an average scene. 400 nits are simply not good enough to display HDR content the way it should be. It is bright and things look great but the Gigabyte AORUS FI27Q-P aligns itself with most PC monitors on the market when it comes to brightness. It is okay but not fantastic. 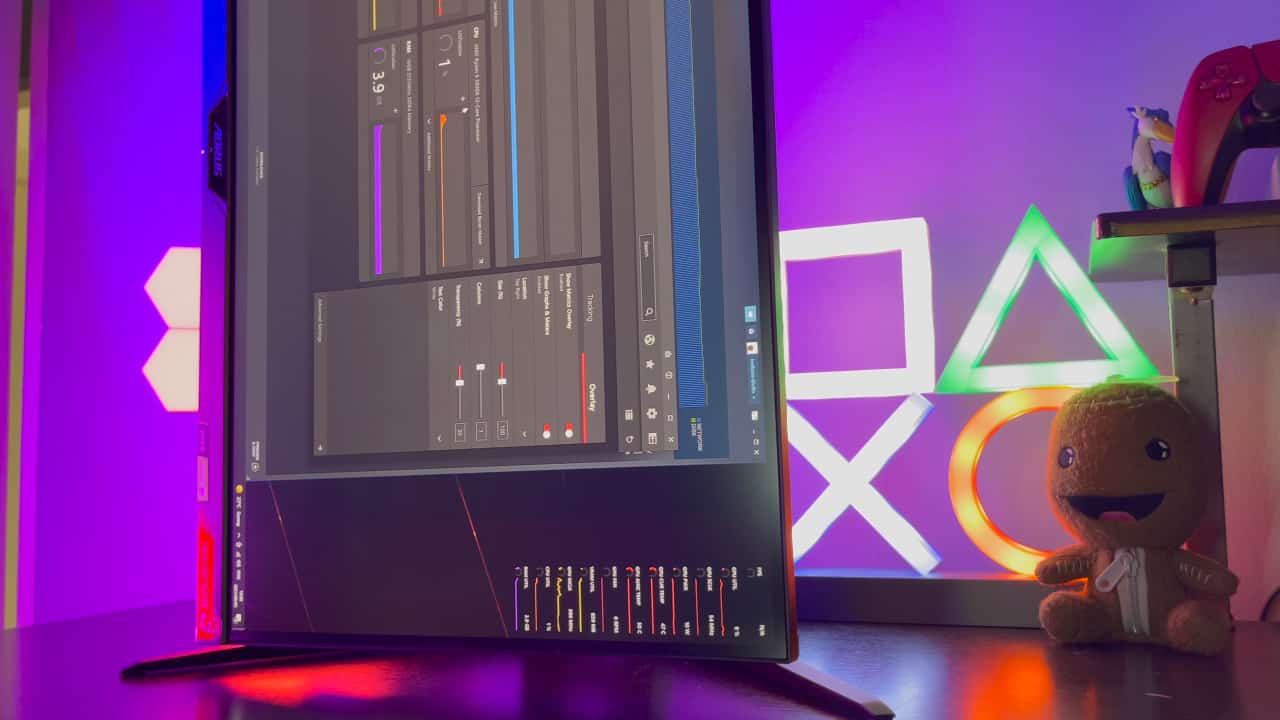 The overall image quality on the monitor is good. This is an IPS panel so there’s no local dimming and the deep contrast in games is often ruined by the panel’s blooming and glow. It is hard to ignore this glow, especially when playing games that are darker in the atmosphere. A dark cave in Destiny 2, for example, isn’t as dark due to the blooming on the black areas. Still, the monitor is able to deliver some decent image quality and a great contrast ratio in most testing.

The Gigabyte AORUS FI27Q-P can reach a max of 165Hz when overclocked. This includes VRR support of 165Hz too. However, there was a bit of a blur I noticed in some games when using AMD FreeSync. It also delivers some outstanding input lag of 4ms at native resolution and 6ms when using 10-bit HDR. The response time is also decent and benefits from making use of the “Speed” setting to bring it down to 10ms. This Speed setting also helped with the blur. 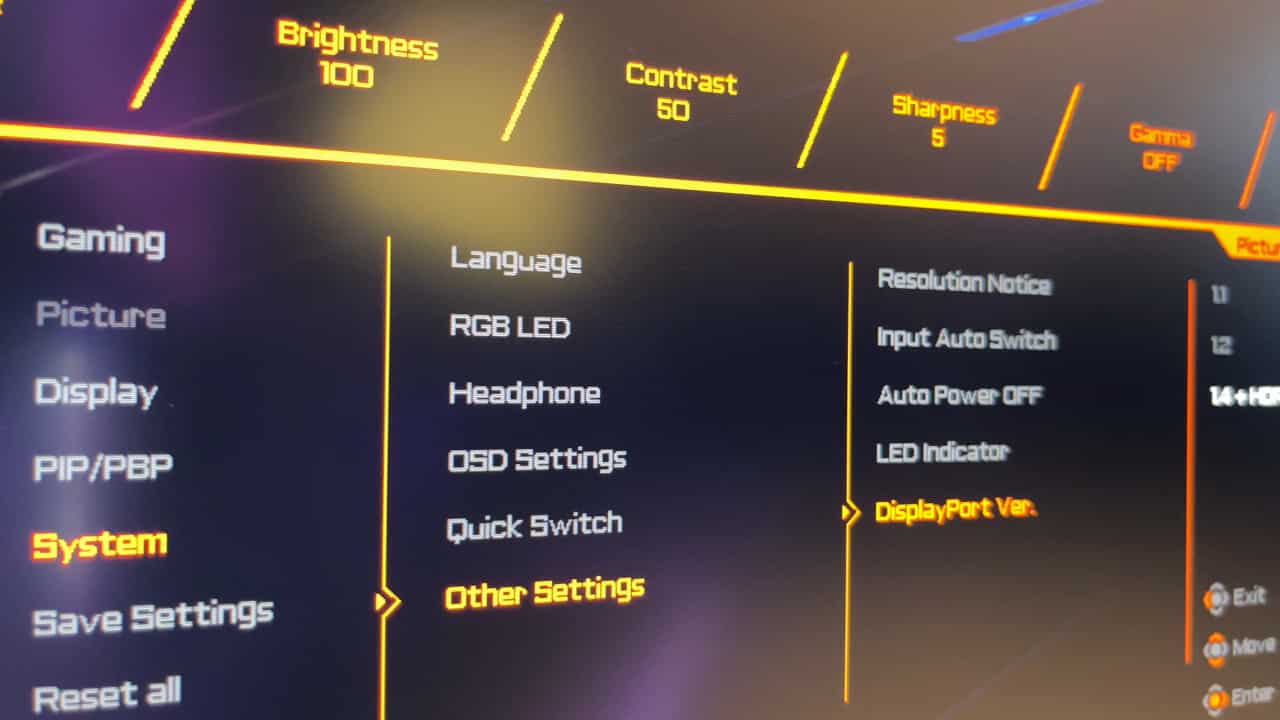 The Gigabyte AORUS FI27Q-P is a hefty monitor with some of the best tech around. I wish it was brighter and for this price, I hoped it would have a better panel that incorporated some sort of dimming. However, its 165Hz support, WQHD resolution and simple design make it ideal for PC and console gamers. I had this display hooked up to my Xbox Series X, PC and PS5 and loved every moment I had with it. You just need to be happy spending R14,999 on a display first.

This Gigabyte AORUS FI27Q-P review is based on a load unit sent to us from Gigabyte. The monitor is now available in SA at select retailers from R14,999.