The Logitech G Pro X Superlight is the lightest gaming mouse I have ever used. No, really. While the name says “Superlight”, Logitech isn’t playing games here with this gaming accessory. It weighs just 63 grams which is impressive. Not only did the mouse feel like I was swishing a hollow plastic shell around my desk, but it also provides some great tech inside it which makes it even more remarkable.

There are some downsides to the Logitech G Pro X Superlight. I kinda feel like the design is basic and only caters to a specific type of gamer or if anything, professional gamer, and the price is a bit out of this world. There’s also some questionable wireless charging implementation but I will talk about that in a bit. 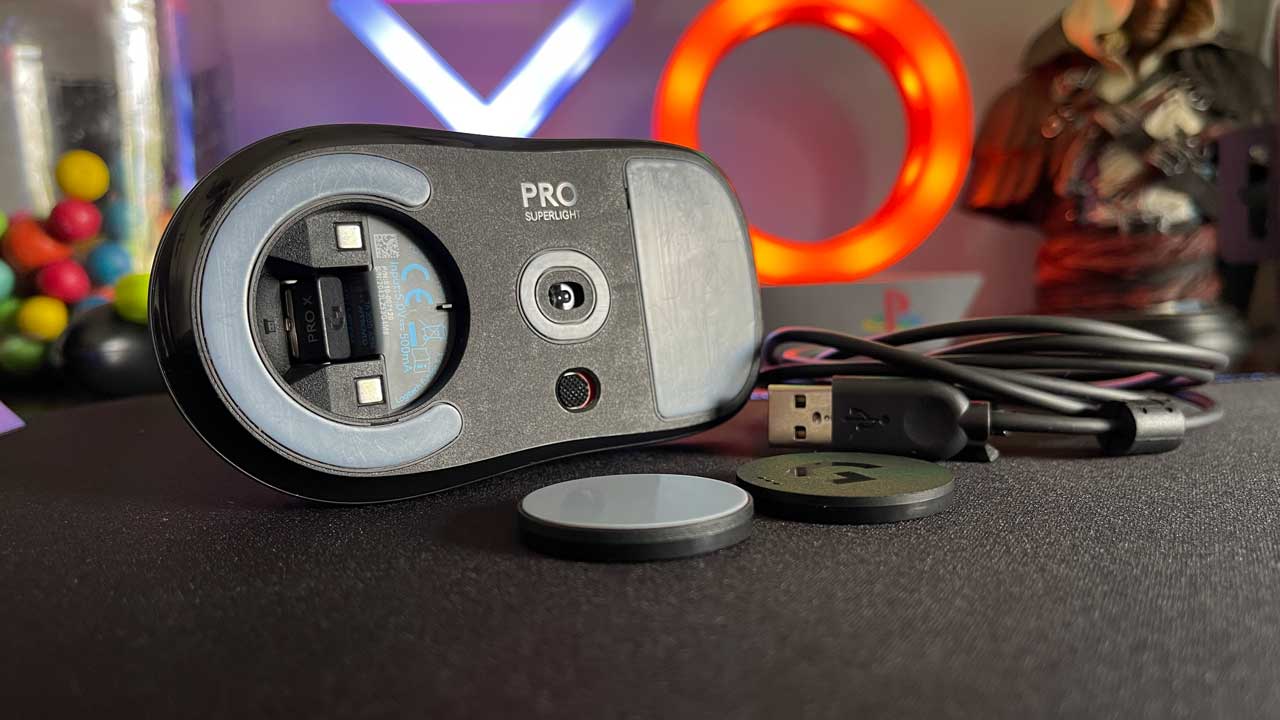 For the most part, the Logitech G Pro X Superlight has a simple yet effective design. It is as run-of-the-mill as possible and only includes 5 buttons. You have the left and right-click, mouse wheel and two side buttons. It boasts a pretty average size when compared to other gaming accessories on the market and its matte plastic coating keeps it clean. There’s no grip here and that could be a problem for some users. The matte plastic is smooth and can be slippery. Users also won’t be able to change any sort of RGB on the Logitech G Pro X Superlight either as there’s no LED or lighting included on the device at all. Only one tiny light to show it is powered on. 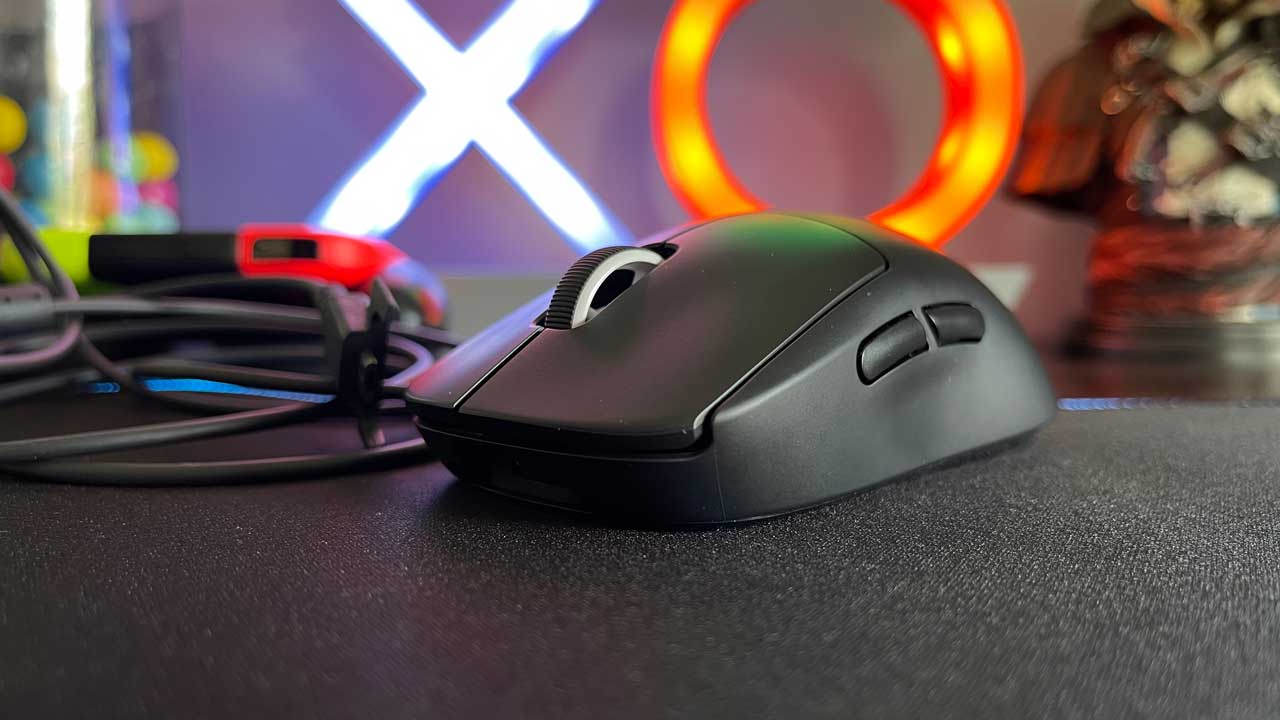 As I said, it is basic and it works. Most of the design decisions surrounding the device including the lack of grip or rubber were most likely chosen to try and keep the weight down. Instead of giving users customization options, the mouse is focused on moving as fast as possible across the table with ease. It is also quite impressive that a battery and all the tech is pumped into this mouse and it only weighs 63 grams.

With that being said, users who want to add grip to the Logitech G Pro X Superlight can easily stick some of the included 3M rubber stickers to it. In the box, Logitech has included four rubber stickers for the click buttons and both sides. Sure, it will ever-so-slightly increase the weight of the mouse but trust me, the grip is more important here. 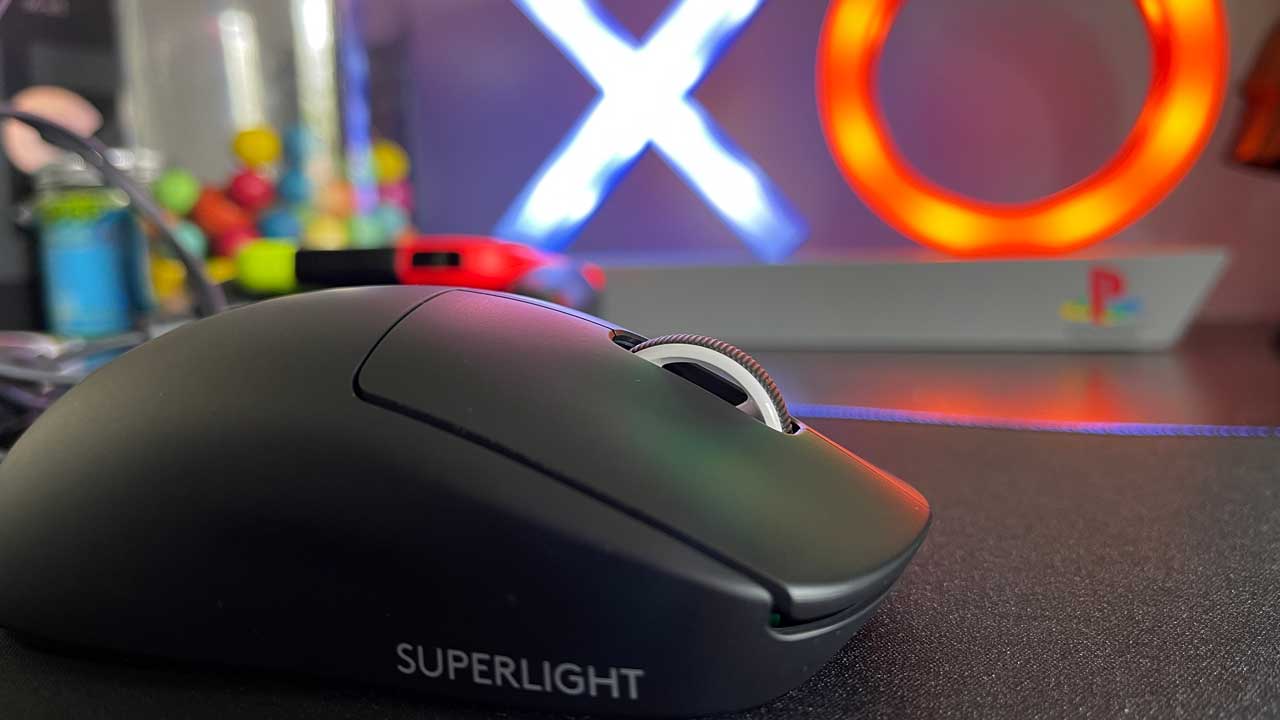 There’s nothing amazing to talk about here when it comes to the design of the Logitech G Pro X Superlight. The device comes in black or white, and underneath there are some PTFE panels that help it slide with ease. Uses can also add an additional PTFE foot to the device by replacing the current disc at the bottom with the included extra one in the box. It was nice of Logitech to include all these cool additional goodies in the box instead of locking players behind their “vision” for the mouse. If you do add the extra PTFE disc, the mouse has a whopping four traction points which go a long way into making it perform faster and smoother.

When it comes to the battery life of the Logitech G Pro X Superlight, users can expect to get around 70-80 hours with it. It is not great compared to other wireless mice on the market but it will do. The battery cell is probably a lot smaller to avoid adding weight to the mouse. 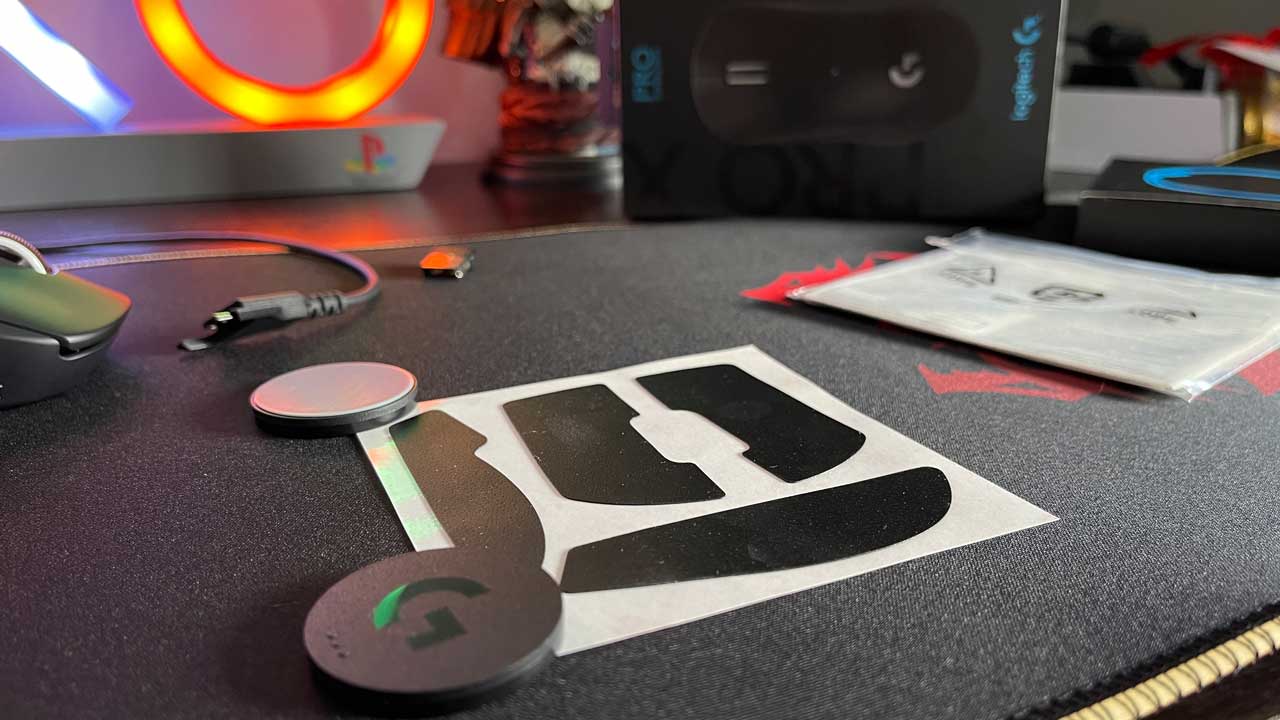 As for the charging, the Logitech G Pro X Superlight battery can be charged by using the standard Micro USB cable included in the box. The cable connects nicely to the front of the mouse and while it is clearly noticeable, I could live with it for a few hours while it charges. However, I can’t help but feel that in 2021 if you’re not using USB-C then what are you doing with your life? It makes it easier to plug cables in and you won’t have to resort to a funny-shaped cable end to avoid users plugging the cable in the wrong way. This is exactly what Logitech has done. A strange-looking cable end and a Micro-USB port which I have very cables around the house these days.

The Logitech G Pro X Superlight can also be wirelessly charged but don’t get your hopes up. Users will need to purchase the Logitech G Powerplay mousepad that will set you back around R3500 – R4000 in SA. While the idea of a mousepad always charging my mouse is great, I can’t warrant spending that and you should not either. Just plug it in for a few minutes and save yourself the spend. Logitech also forces you to replace the extra PTFE disc with the Powerplay one so you can’t even benefit from the extra slide while using the mouse pad to charge the device. 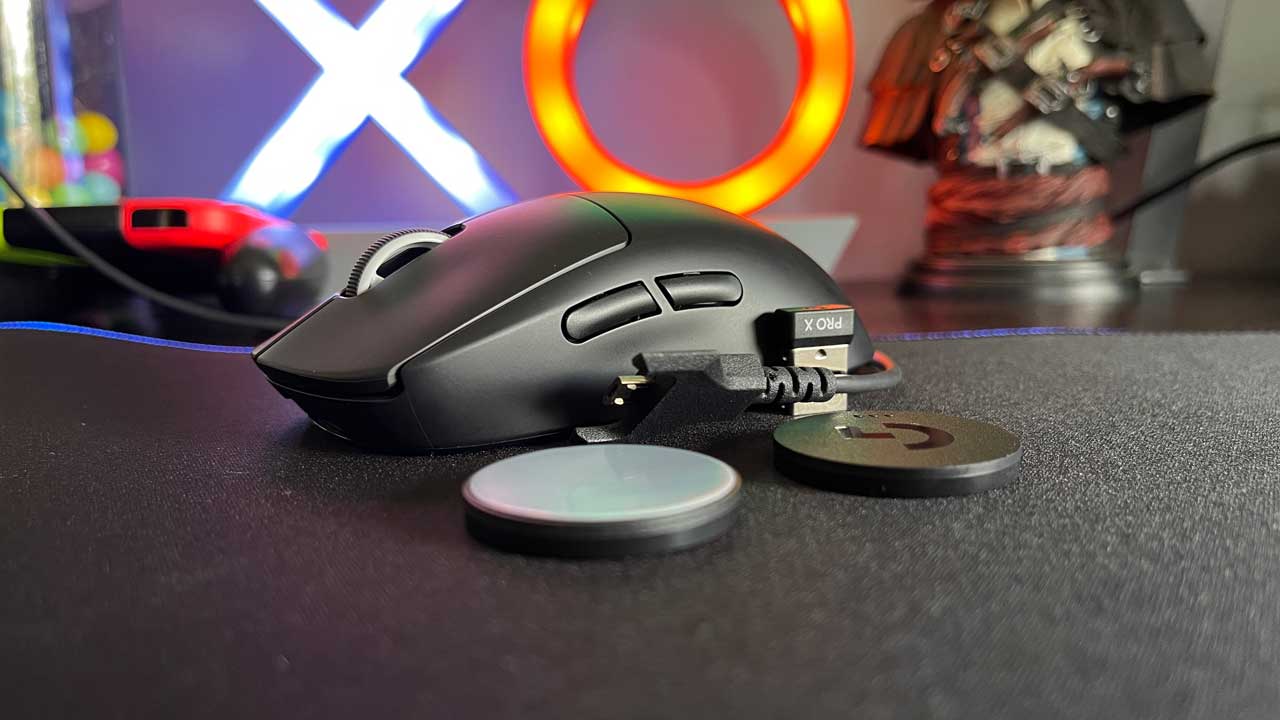 Of course, it is not a modern-day gaming accessory without the extra software and the Logitech G Pro X Superlight relies on the G Hub to function. Thankfully, the software is easy to get around and master. Here I could tweak my DPI and save my presets to the on-board memory.

This then let me use the mouse the way I wanted to and experience the best it has to offer. The lack of a dedicated DPI button also means that you will rely on the G Hub to change and tweak the settings. 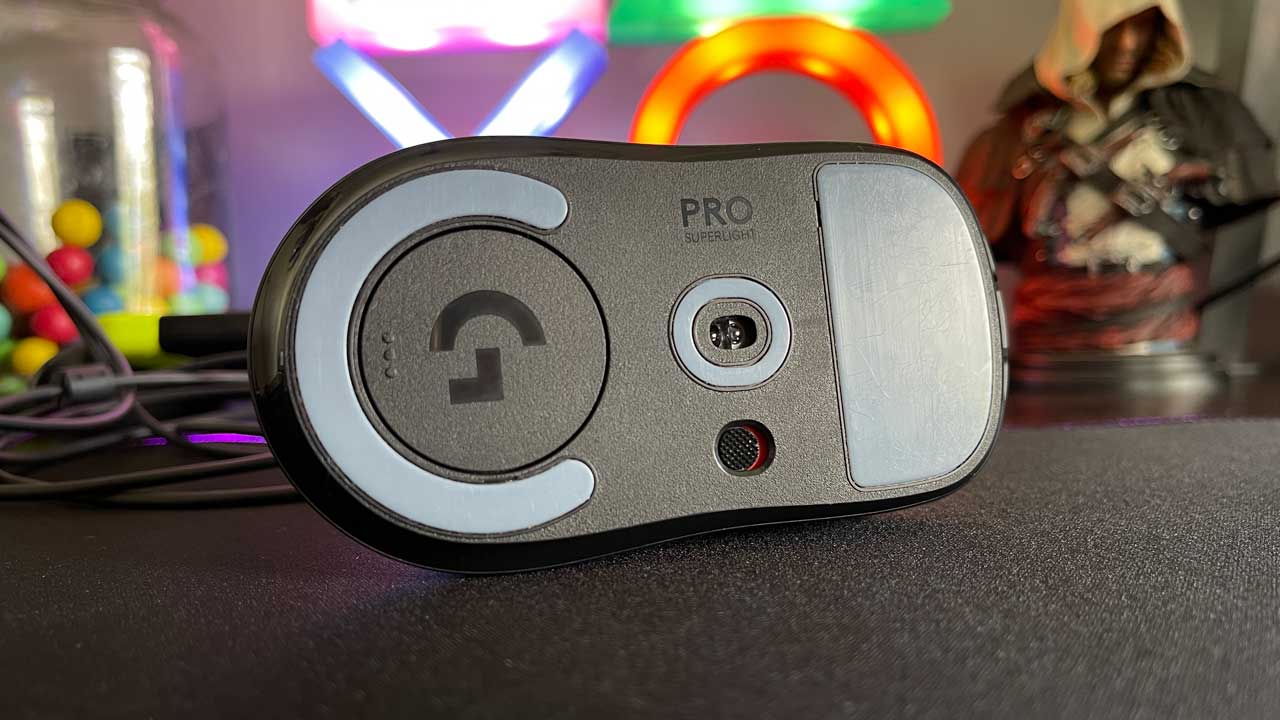 The general use of the mouse was great. I can’t complain about anything. It lasts fairly long when it comes to battery life and the G Hub makes it easy to change what you need. I loved how light and quick the mouse moves when the going gets tough and the sheer lack of weight is truly a remarkable design feat.

The Logitech G Pro X Superlight costs R2,800. That is a lot of money to ask for a mouse. There’s no RGB, there are no custom macro triggers, there isn’t even a DPI button. You then need to take into consideration that if you want the best experience from this device then you will have to fork out even more money for the wireless charging mousepad. Even that is a feature with loads of restrictions and “only works if you” excuses.

Clearly, Logitech has compromised on quite a lot here in order to get the Logitech G Pro X Superlight down to its ideal weight and the general experience is superb. However, there are better devices out there including the Razer Viper Ultimate that costs the same, has more RGB, buttons and better wireless charging. Of course, it is heavier so you need to weigh up what is more important to you.  You need to really want a 63-gram mouse if you are willing to put up with the Logitech G Pro X Superlight’s features and lack of buttons and wireless charging limitations.

This Logitech G Pro X Superlight review was based on a device sent to us by Logitech South Africa. It is now available in SA starting at R2,799