The Samsung A series has always been the go-to for consumers when it came to entering the Samsung mobile family without it costing a fortune. We reviewed the Samsung Galaxy A31 last year around the same time and it marked one of the best budget phones on the market. This year, the Samsung Galaxy A32 is here and it provides the same amount of value with a few tweaks to the hardware.

Even though the differences are only far and few between, the Samsung Galaxy A32 still packs tech and features you can only dream of when looking at a mobile device that costs R4,999. Its 6.4-inch AMOLED screen packs a 90Hz refresh rate and the 5,000mAh battery is damn impressive too. When looking at this phone, it kind of makes high-end models look way overpriced.

For the most part, the Samsung Galaxy A32 reminds me of Apple’s iPhone SE range. The bold colours make the phone stand out in your hand and clearly, Samsung is targetting a younger crowd here. The phone packs a glossy back that gets dirty very quickly. It also scratches like nobody’s business so you will want a cover on the day you pick it up. 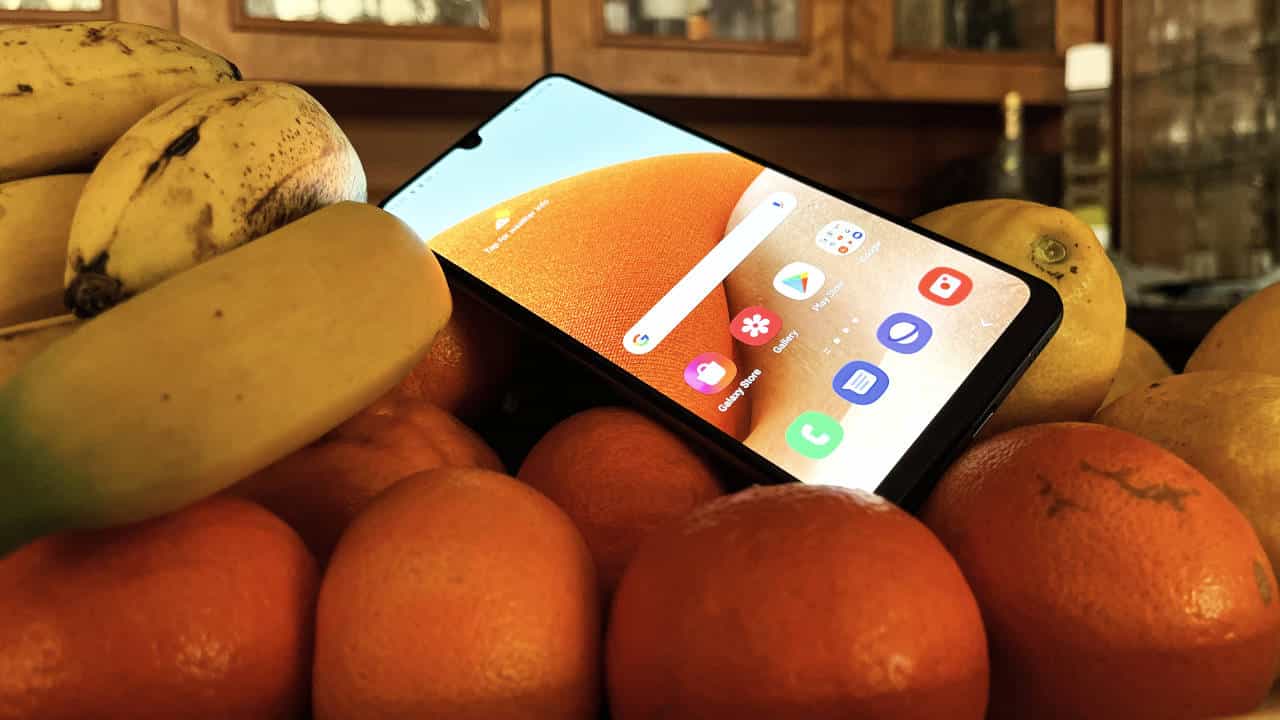 When it comes to the materials, the Samsung Galaxy A32 feels cheap and there’s no beating around the bush here. It is plastic through and through and you’re not getting any sort of high-end finish on this phone.

The Samsung Galaxy A32 display makes up most of the device’s front face. There is a 6.5-inch LCD with a teardrop camera notch and thin bezels down the sides of the device. The bottom. however, is a lot thicker when it comes to the bezels. This is most likely due to the display’s cabling underneath the display. 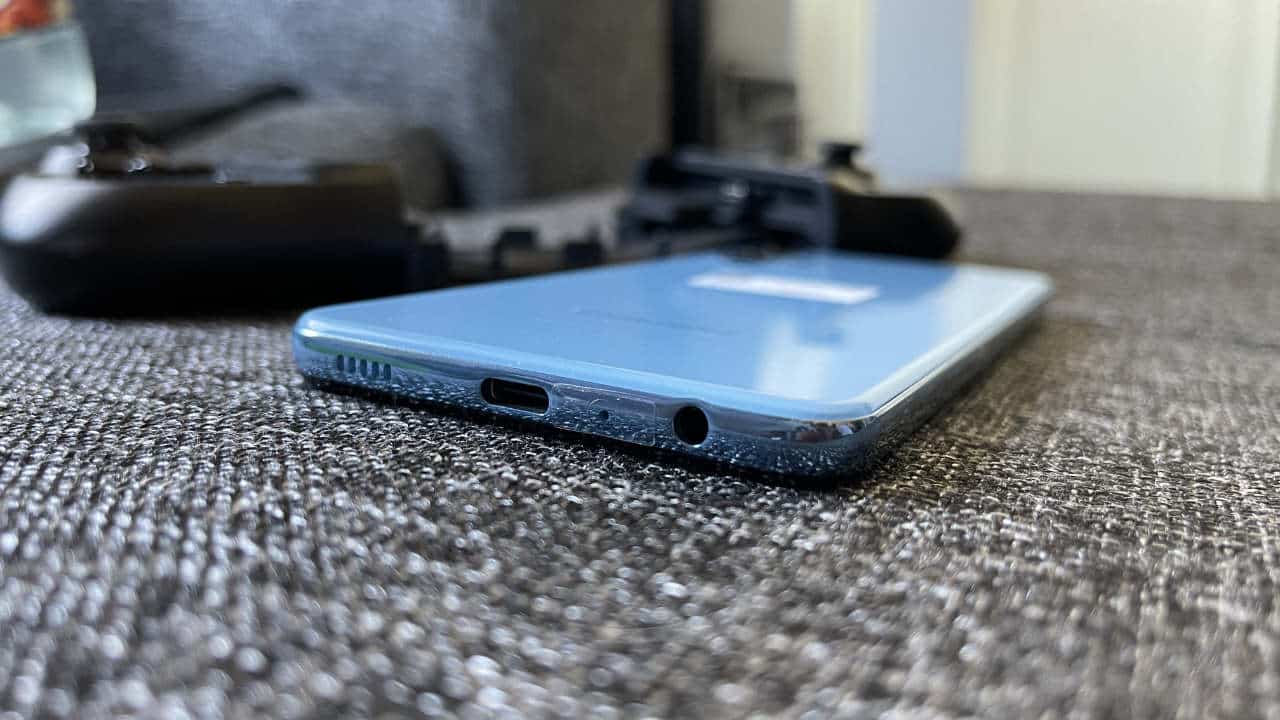 The display is gorgeous. the 1080 x 2400 resolution provides a crisp viewing experience throughout the device. Fonts look sharp and clear, colours are vibrant and the variable refresh rate makes everything feel and look smoother.

When it comes to the outer shell of the Samsung Galaxy A32, you’ll find the charging port at the bottom and the audio jack. The Samsung Galaxy A32 is one of the very few devices around that still includes one of these prehistoric contraptions so if you have not moved over to wireless earphones yet then you are in luck.

Other smaller design features include the loudspeaker at the bottom, alongside a microphone. There’s also the camera array that sticks out of the back. I did not love this camera design at all. Not only do most of the cameras provide an. “okay” photography experience but the lenses just stick out and look strange. On the black model, it is not so bad but the blue model I reviewed looked ghastly.

There are five sensors at the back. Four of which are camera lenses and the other one is a flash. Even the flash has a hideous black ring around it that makes it stick out even more. You may disagree with me but the camera array just looks scattered and unclean. Even if there was a small square underneath them all to create some sort of uniformity, it would have gone a long way. These lenses also stick out quite a bit making them prone to scratches when placed on the table.

The Samsung Galaxy A32 feels great to hold though even if the outer shell is plastic. It only weighs 184g making it light in your hand too. I had no complaints here. It fits perfectly in my hand, I could reach the entire screen with my thumb and if anything, it provided more comfort than my iPhone 12 Pro Max.

The Samsung Galaxy A32 packs a Mediatek Helio G80 and a Mali G52 processor. Both of these components work together to power the device’s display, deliver a fantastic battery life and make it possible to game on the go. Daily use of the Samsung Galaxy A32 was smooth with apps opening quickly and multitasking workloads being a breeze. Every now and then I did notice a slight delay when switching back to a heavy RAM app but it was nothing worth complaining about.

Samsung’s custom OS skin of Android also makes things feel fantastic. The OS is smooth, getting around is flawless and everything you need is right there. It won’t be an Android phone review without complaining about the mass amounts of bloatware you will find here. Apps you don’t need get in the way of your device and the sheer number of accounts every app wants you to sign up for gets annoying. The main reason I stay on iOS. However, the Samsung Galaxy A32 feels fantastic to use and the OS makes this possible.

Gaming is also okay on the device. I won’t say it is the best GPU ever in a smartphone but you can get away with playing most of the latest games at a decent frame rate while things still look good. The variable refresh rate on the display also helps expand this experience in some titles. Of course, don’t rely too much on the battery life while maxing games out on the highest refresh rate. 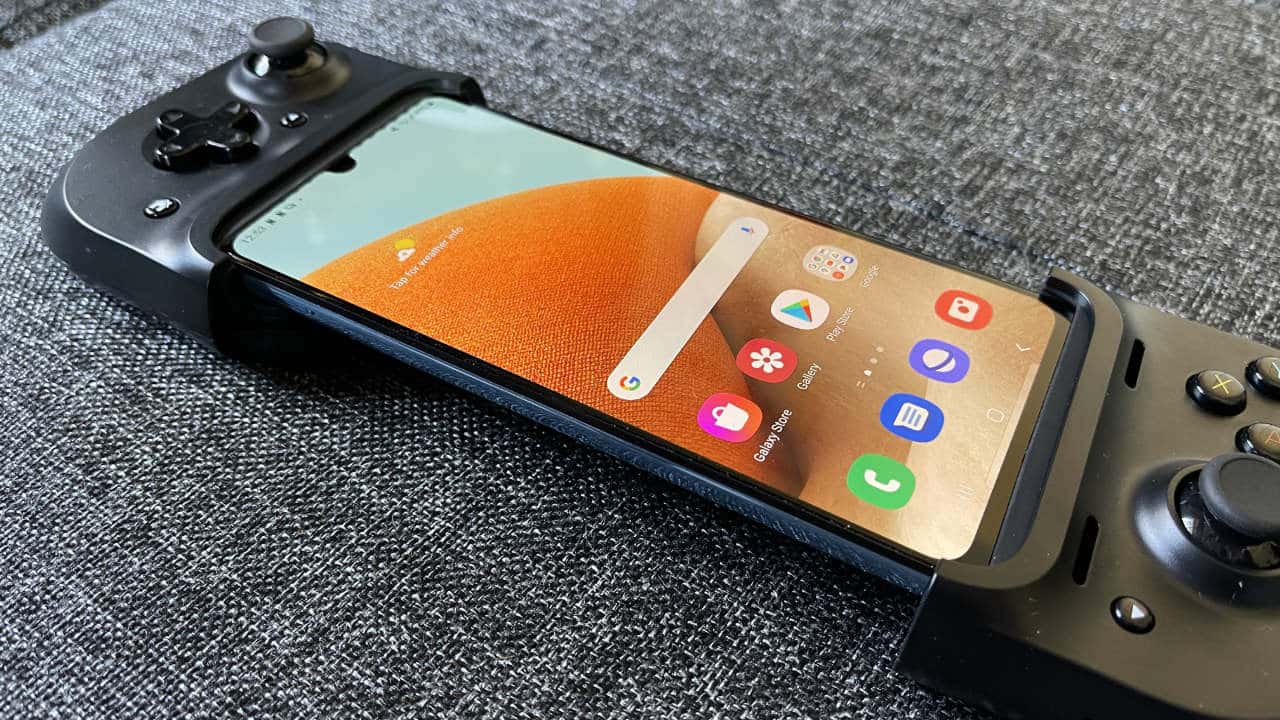 Speaking of the battery life, the Samsung Galaxy A32 does include one of the best batteries around and for the price tag of this device, I was impressed. You can easily get two days of battery life out of this phone while doing your daily social media, texting and the odd video watching here and there. This is also if you leave the fresh rate on default at 60fps. However, you can decrease this battery life by increasing the phone’s performance, gaming and utilizing more brightness on the display. Still, this battery life puts most budget phones and even some high-end ones to shame.

The camera system on the Samsung Galaxy A32 irked me a bit. Instead of cutting the number of sensors down on the device, Samsung increased them while also making them all pretty “okay”. A better single-sensor lens would have gone a long way here to provide the “greatest camera lens” on a budget phone. The Samsung Galaxy A32 has four sensors. The main lens is 64MP. This bumped up from the 48MP on the A31 last year. There’s also an 8MP ultra-wide-angle and a 5MP macro lens. Samsung also included a 5MP depth lens.

All these sensors take good photos in bright light. The colours are vivid, objects are detailed and the overall image quality is decent enough. The macro lens gets nice up-close shots with a fantastic level of detail. It is always a nice lens to have around. The depth lens is also okay. It is mainly used for portrait shots that blur the background but I felt as if the entire image was polished a bit when using this lens. 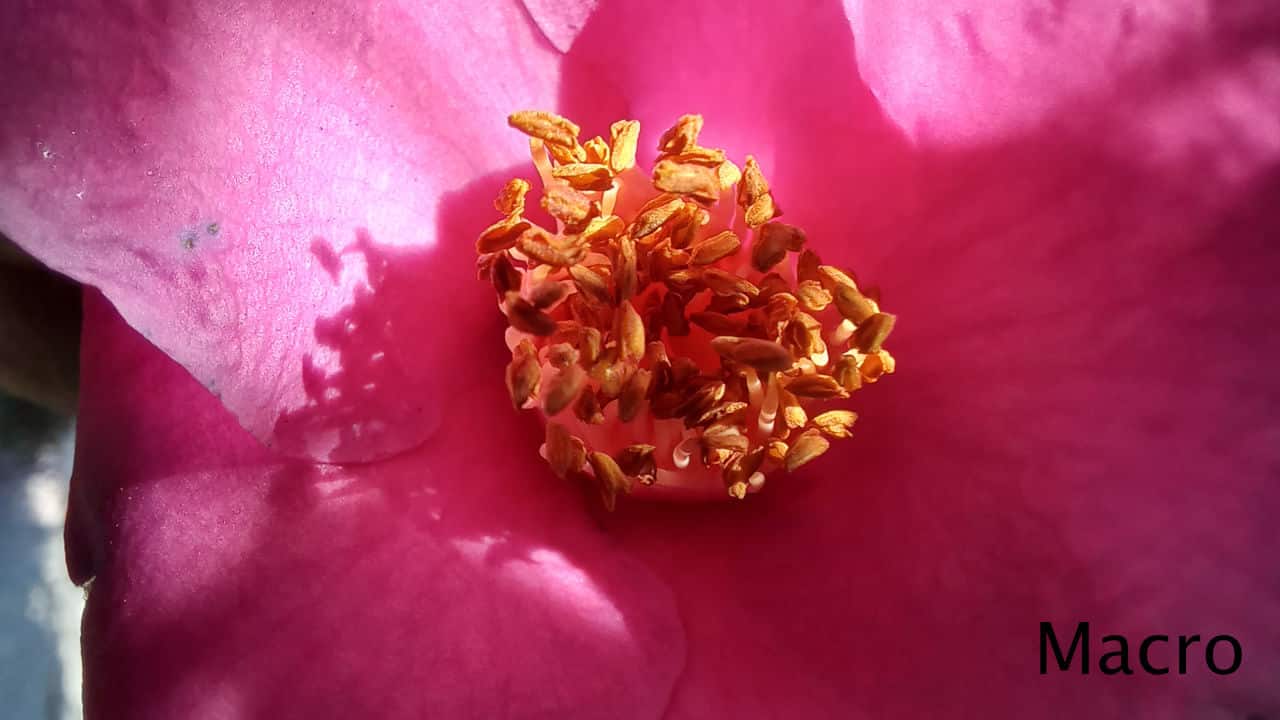 You will probably use the 64MP lens the most. That is why I say Samsung should rather cut back on the number of lenses and release one killer sensor on their budget phones. It not only makes it easier to use but the one lens means less fuss over selecting the sensor and fiddling in the options to find the best shot.

The issues I had with the Samsung Galaxy A32 didn’t get in the way much. The device may have some shortcomings when it comes to the build and CPU but for R5,000 you simply can’t go wrong with the incredible list of features on this phone. It is truly the best budget phone on the market without a doubt.

The Samsung Galaxy A32 is now available in SA starting at R4,999 for the Dual-Sim model