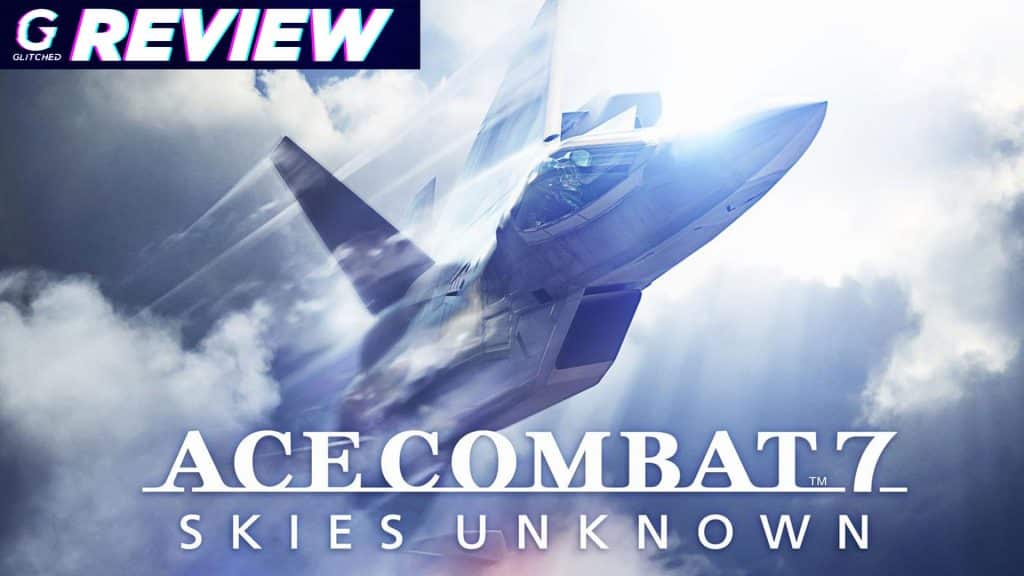 I grew up playing the Ace Combat games as I am sure many of you did too and they have always delivered some pretty epic jet fighting gameplay set in fictional worlds with a gripping story and great level of detail when it comes to aircraft and customization. Ace Combat 7: Skies Unknown may be lacking on the story side of things but it makes up for it thanks to its fantastic gameplay and exceptional action.

Now believe me when I say that Ace Combat 7: Skies Unknown is most likely the best in the series since the 2007 release Ace Combat 6: Fires of Liberation. Sure, many games came in between the two such as Assault Horizon and Ace Combat Infinity but none of them managed to deliver on the gameplay of all the main numbered games. It seems that the break has done the series well.

There is not a lot to digest in Ace Combat 7: Skies Unknown. At first, I thought I was in for an over-complicated aircraft game sort of like Project CARS but with jets but I was wrong. The game has 28 aircraft with most of them being modelled and detailed after real-world vehicles. Every single of one of them is more detailed than the last and they all feel very different. Even the inside of them looks fantastic. Not that I play with a cockpit camera enabled but the time I attempted to do so, I was pleasantly surprised with the attention to detail inside them.

The game is divided into three game modes, two on PC and Xbox One with the third being a VR mode exclusive to PS4. More on that later. The Campaign mode is where I spent most of my time. Set across twenty missions and a lengthy story, the campaign mode tells the tale of the conflict between Osea and Erusea set in the fictional universe of “Strangereal”. You take on the role of a voiceless Osean pilot as you go from being a nobody to a somebody through a series of missions that test your skill across the diverse world.

The story is pretty confusing and you really have to pay attention to the long cinematics and lengthily missions briefs to truly grasp what is going on. The gist of it is that you slowly make your way up the ranks and meet a load of convicts turned prisoner-pilots that serve as lures in missions. One thing leads to another and you find yourself amidst a war fighting against some rather deadly aircraft in this 10-hour campaign. If anything, the story has a very “Metal Gear” vibe to it thanks to its ability to be as extra as possible at times to the point where you even question what in the world is going on.

It is the joy of flying through the air, shooting things down and being an all-around badass that makes Ace Combat 7 so appealing. The missions don’t have much going on to set themselves apart from each other other than a few different things to blow up, but the diverse locations make it well worth the ride. Some missions took me high above the clouds to destroy a large fleet of self-flying drones. Others put my flying to the test as I soared through jungle mountains and a fierce storm that not only struck my jet with lightning, rendering my HUD useless but the wind often pushed it into the cliffside failing my attempt.

No matter how simple these missions were, they managed to all deliver something that made them unique. It also helps that the game looks gorgeous and makes you want to see more of it. Clouds are fluffy and dense, landscapes are highly detailed and full of high-res textures, and the detail in every aircraft is unparallel.

When it comes to flying, it is also not as hard as I thought it would be and stays true to the series’ controls and movement systems. Soaring through the sky to hold the brake and accelerate at the same time to flip around and launch missiles into a passing drone was so rewarding. Swooping down low and dropping bombs on a base on the ground looks epic, and fighting through the clouds as you juggle the wind, lightning, freezing up and the enemies all trying to shoot you down was the peak of the excitement in the game.

There was just something special about the action and how it all came together. Aircrafts also feel great and the roster manages to deliver a diverse experience for each one. Every mission rewards you with MPB which you can use to purchase new vehicles, parts to improve them and different weapon types. Paying attention to the mission briefing was a great way to determine what aircraft would be ideal for that mission. Would I need to equip ground rockets to dissipate tanks and AA guns on the ground or are the missions solely in the sky? The best loadout would determine the success rate of the mission as your aircraft only has a specific amount of ammunition and going in with the wrong weapon would not end well.

The Aircraft Tree is the place to purchase new things and there is a wide range of options available. New jets meant mastering its flight movement and each one came with three special weapons to master too. This meant that the campaign never felt old at any time. Do well in your mission and you will have enough points to buy a new jet and weapons too. The next mission would then have a refreshing new appeal. The more you purchase, there more there is to unlock which gives the game a great sense of accomplishment.

Outside of the campaign we then have the multiplayer mode which, for me, felt like an afterthought. Your Aircraft Tree progression from the story campaign follows which is great for progression but the game modes are pretty boring. Whether you are playing on a team, or in a free-for-all, all you need to do is shoot everything down and rack up points. This is nothing more or nothing less than a basic multiplayer experience and those who are looking for a dedicated career in the mode will not find it here. It is also very unbalanced as across the three fighter classes, there is that one over-powered version that everyone is using. Once you unlock that it will mean just going into these modes to blow other players up without any real objective.

Then we have the VR mode which is exclusive to PlayStation VR owners and this is well, short-lived. The mode stands on its own and does not enable VR in the campaign on multiplayer, rather it has three missions which all revolve around destroying all enemies. These three missions last around 20-minutes each and before you know it, they are over and you will never return to the mode.

While the mode is short, it does not mean it is pointless as the game mode delivers a pretty great experience. Sitting in the chair of a jet flying through the air, performing speed barrels and loops in the sky was riveting and something worth experiencing. The motion sickness never set in until I was circling around near the ground shooting bases and tanks but it was never unbearable. The VR mode is truly a great addition, if only it was longer and had more context.

Ace Combat 7: Skies Unknown is an exceptional game. Its campaign delivers a great story with some explosive gameplay and an easy-to-master experience that will make newcomers and veteran flyers pretty happy. While its multiplayer is not world-class, there is enough to chew here to warrant its price tag and if you have missed the classic aircraft games then this is no doubt the best in a decade.