Horizon Zero Dawn on PC is exactly what you would expect – a superb game delivered with some revamped visuals and a handful of settings to get the most out of your overpriced gaming rig. Not only is this the best way to experience the generation-defining game but it also offers non PS4 owners the opportunity to play a once-PlayStation exclusive.

It was a strange experience receiving a review code for a game I have only been able to play on the PlayStation platform. Not to mention using a keyboard and mouse with it (at first, course I switched to a controller). There was no doubt this sense of excitement throughout the whole experience. The big selling point is the robust graphical settings available to tweak. Not to mention the game makes for a fantastic benchmark for your hardware. I will no doubt use it as a pinnacle title to review graphic cards and notebooks in the future. 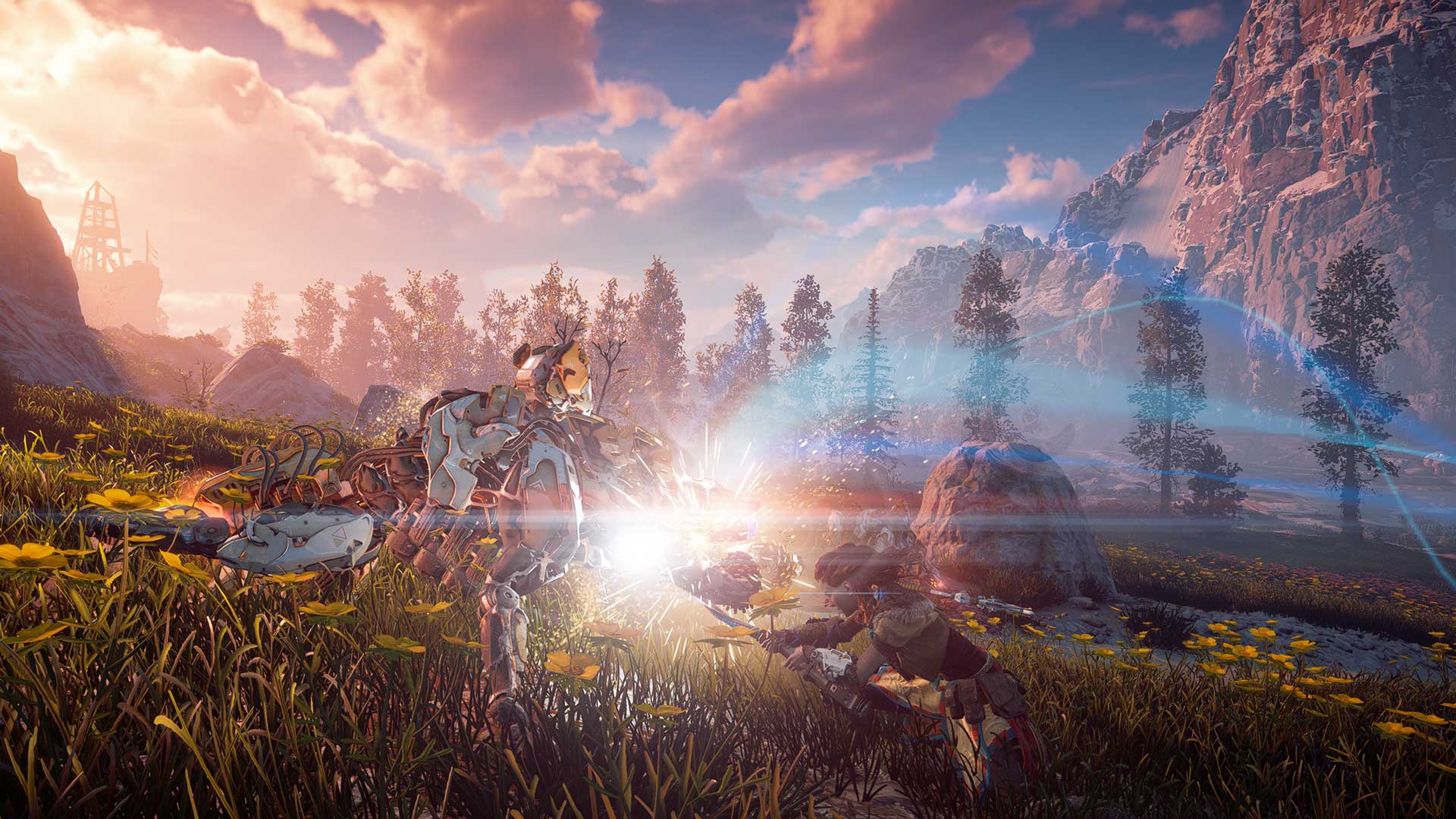 Booting up Horizon Zero Dawn – Complete Edition on PC was a challenge at first. The game requires a first-time shader compilation which takes a while to complete. Not to mention the crash which I experienced within the first ten minutes of watching the opening cinematic. This, forcing me to rewatch the whole thing again. I am not going to pretend the game was flawless. It comes with its own set of PC-related issues such as DirectX bugs, some jittering and of course, the occasional crash.

Let’s get performance out of the way. I played Horizon Zero Dawn – Complete Edition on my Acer Predator Helios 500. It packs a 144Hz display, a GTX 1070, 16GB of RAM and a Core-i9 CPU. Optimization took a few seconds. The game includes a crazy amount of settings that will make all PC owners foam at the mouth. This included rendering resolution, unlocked framerates, ultrawide support and a bunch of preset graphical options. This includes ambient occlusion, draw distance and other physical-based rendering options. 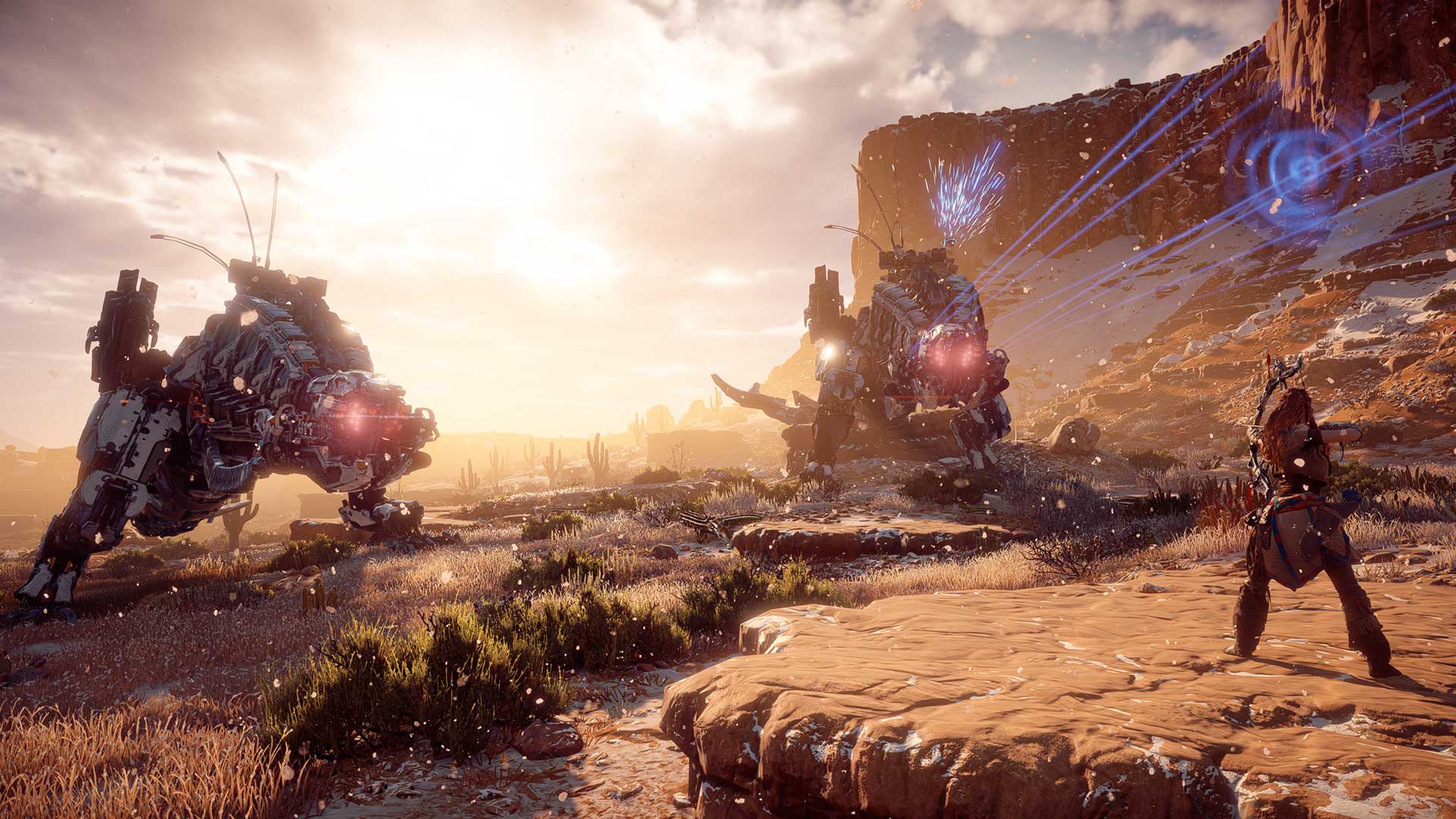 The game offers a nice way to see what these settings do. There’s a small image on the right-hand side of the preset that explains what would happen should you increase the setting. Here, I could change the shadow quality, clouds, reflections, motion blur and more. There’s even a setting to change the “Model Quality” which increases the geometry of an object in the distance. The lower this setting, the blockier mountains looked in the distance. It added a lot of realism to the game’s general visual appeal.

When it comes to the field of view options, I tested them out but suffer from some intense motion sickness if I play games from long periods of time with high field of view. The general idea here is to allow more space on the screen and a greater perspective of what is going on in front of you. It works wonders for the game and PC gamers will be happy to know it looks amazing. 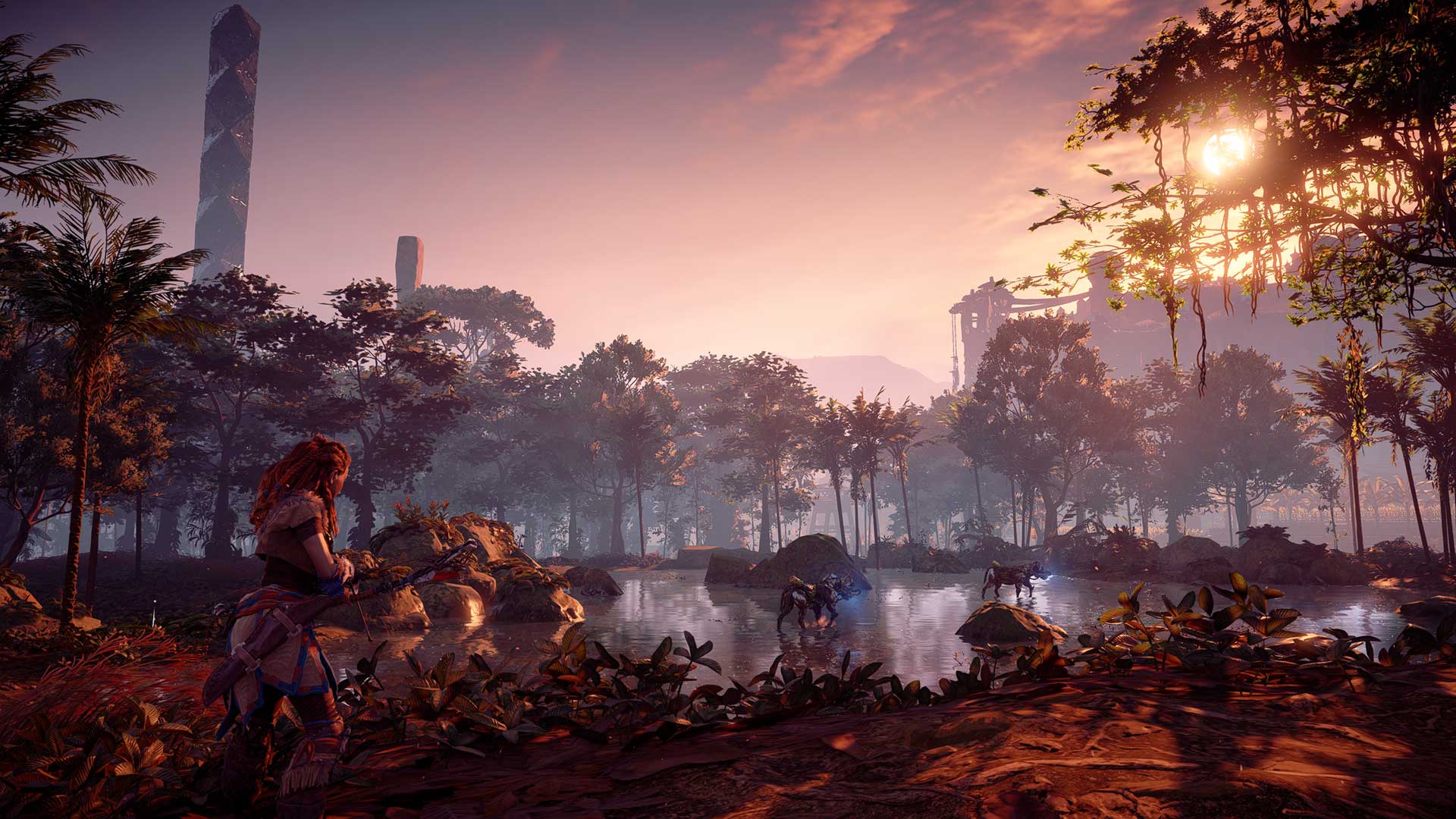 As for general performance, Horizon Zero Dawn – Complete Edition on PC is quite demanding. With my set up I managed to get an average 100fps on maxed-out settings at 1080p. I then plugged my laptop into my Samsung 4K QLED to benefit from the HDR and UHD display. This took the fps down to 35-55fps which is not great, but not bad either.

Again, this is with everything maxed out. I am mainly a console gamer so this sort of experience is the norm. It was also the best way to experience the game with HDR, 4K and everything cranked up to the max. Sure, it is not 60FPS but I got a gorgeous 4K HDR game with sharp visuals and great overall quality. Not to mention Horizon Zero Dawn looks unbelievable with HDR enabled and is worth sacrificing a few frames in order to enjoy.  Personal preference, of course. It was surprising to see how well the game ran with this setup. I could also easily tweak a few settings to increase the fps by sacrificing some visual changes. 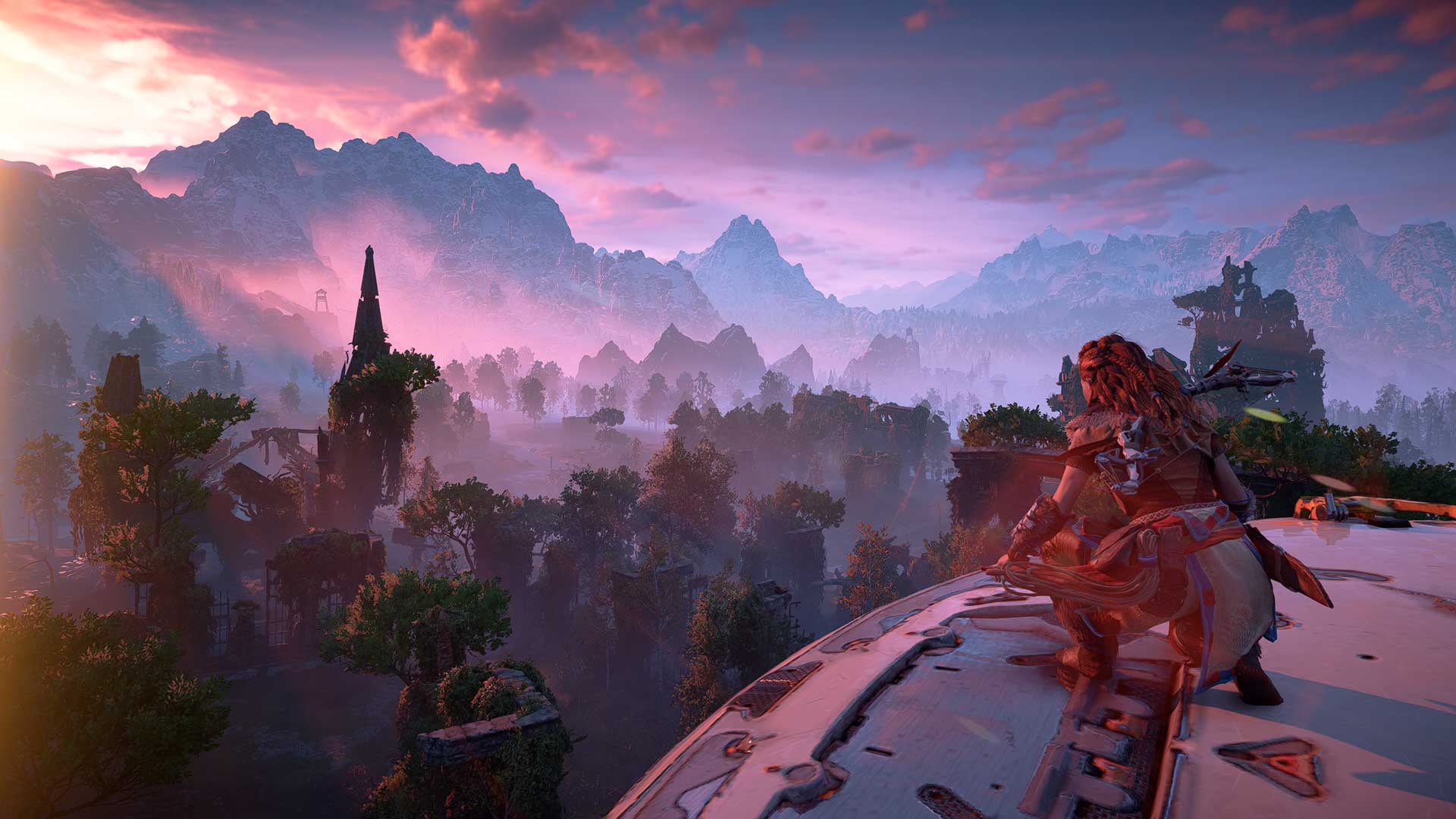 One strange thing I noticed was the lack of 1440p support. The resolution goes straight from 1080p to 3840×2160. It would have been nice to have something in between the two. I am sure a simple tweak of the settings files will unlock the option though. I often find that with my GTX 1070, 1440p is the sweet spot for 60FPS games with maxed-out settings. It would not doubt push my machine to 60FPS on my TV.

Horizon Zero Dawn – Complete Edition on PC was suffering from a handful of issues before an update released on the day this review went live. Stuttering crashes and freezing. However, an update to the game and graphics drive seems to have fixed it to a certain degree. I still had issues with some weird render resolution when I booted the game up. I had all my setting on max with 1080p selected by the game was running at a subpar 720p. I restored everything back to normal and ran the benchmark test again to fix the issue. In addition, there were still some crashes that persisted. I am confident these issues will be patched out in the days ahead. 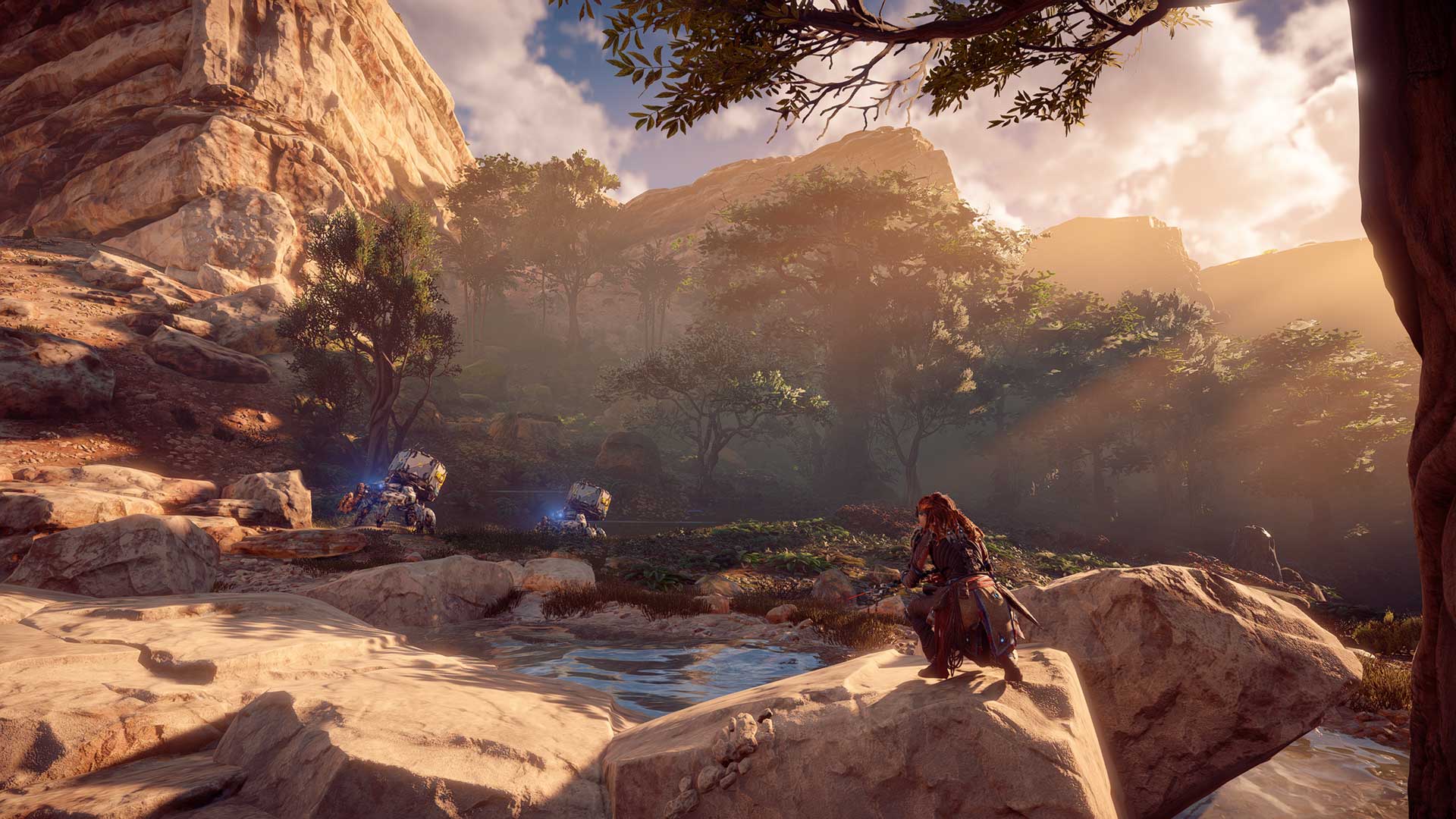 If you have played the game before, Horizon Zero Dawn – Complete Edition on PC is a tough sell. I know many gamers out there already platinumed the game. In addition, Sony released a “GOTY-styled” complete package including the DLC. This is exactly the same game. You’re not getting anything extra here. This game is for two types of people. 1 being the PC-only gamer who does not own a PS4 to play this. 2 being the hardcore PS4 fan who also has a PC and wants to experience the game in the best possible way.

It is going to be tough for that second gamer. Horizon Zero Dawn – Complete Edition on PC is a demanding game. Getting a 102FPS frame rate will cost you some money. It is also important to note that the gameplay, in general, does not require a crazy high frame rate to enjoy. It’s not a shooter and most of the time you are walking around a gorgeous and dense open world. Probably why I was content with 50fps at 4k HDR. It was truly a visual treat.

Horizon Zero Dawn – Complete Edition on PC is a benchmark for game visuals. Sure, it is a demanding game and achieving anything higher than 90fps is going to be tough. However, maxing out the settings and playing this on a large TV with HDR is all you will need to have your breath taken away.