With Far Cry 6 out in the wild (read our review here) Ubisoft’s acclaimed open-world action series has been given the spotlight once again for many reasons. Perhaps Far Cry 6 acted as a gateway for some new fans, while others are reminiscing about their favourite moments and games in the franchise’s long past.

However, one entry has always stood a few feet above the rest. For as high as the Himalayan alps soared into the skies, Far Cry 4 soared with a refined formula, great pacing and incredibly high fun factor. In fact, I’d go as far as calling it a truly phenomenal game. But what exactly made this particular Far Cry stand out in my eyes? 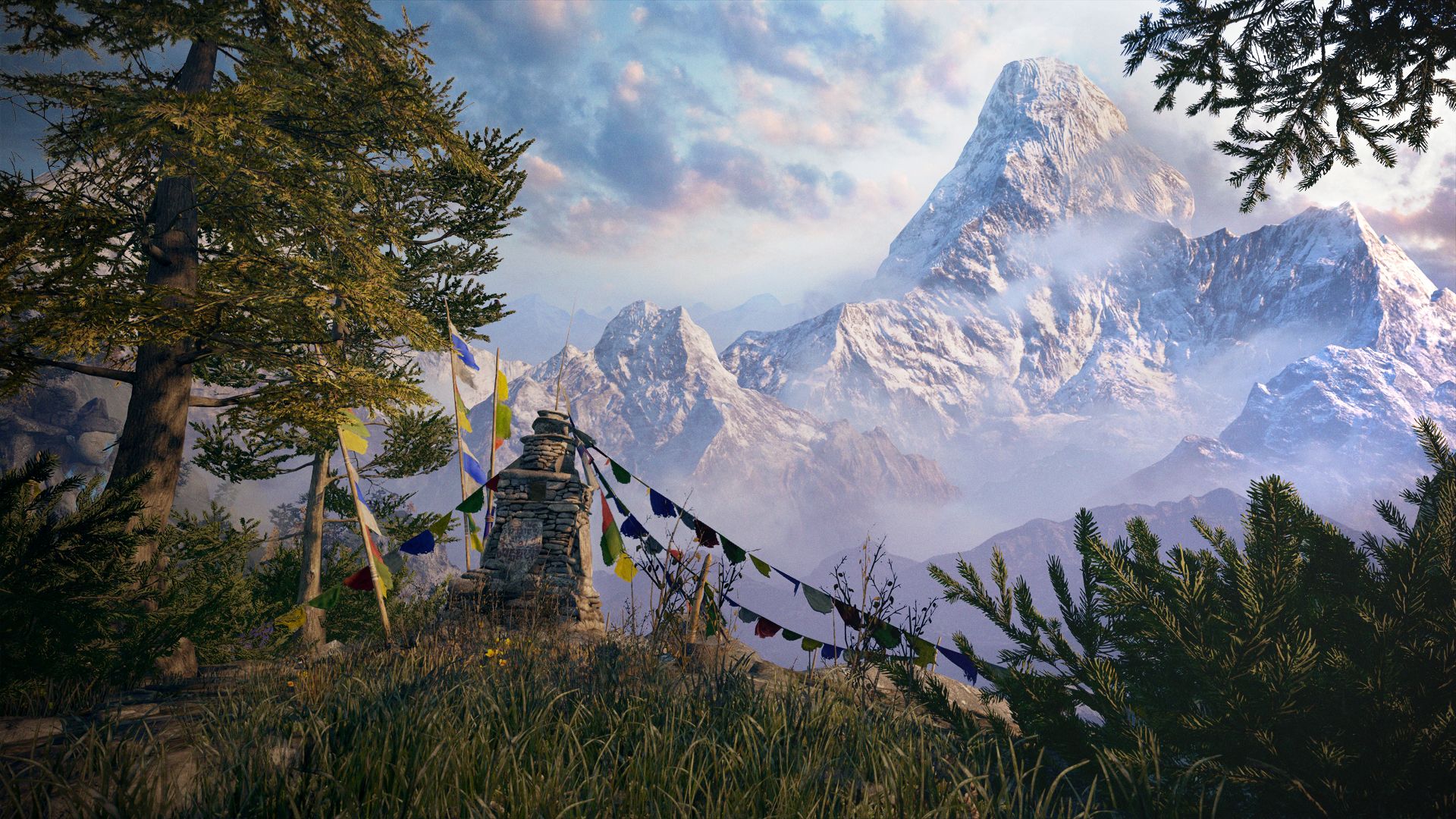 The star of every Far Cry game – apart from its heavily marketed front-cover antagonists – is the setting. The first and third games adopted a tropical island setting, while Far Cry 2 took us to the blazing heart of Africa. However, Far Cry 4 shifted its location to Kyrat, heavily inspired by Nepal and the gorgeously picturesque mountains of the Himalayas. Fans may connect the identity of Far Cry to tropical locations, but it’s in the stunning snowy alps of Kyrat did I feel the most immersed I’ve ever been in the series.

Kyrat excels because of how unique and detached it feels from the rest of the series, while also leaning into the open-world formula that evidently worked for Ubisoft at the time. Kyrat comes to life in the smallest of details. Everything from the whistling of the wind in the ambience to the vertical views of the mountain peaks constantly looming overhead, Kyrat is still one of the most immersive open worlds I’ve played in a game to date. This also extends to the more deliberately paced missions and world events. My biggest issue with Far Cry 3 was how much it bombarded you with open-world things to tackle, but in Far Cry 4, it feels streamlined and maintains that great sense of exploration in between.

Most of all, Kyrat works because it throws players headfirst into the war-torn region without so much as a level gate blocking you from exploration. You explore each section of the map based on the radio towers you liberate, which clears a foggy area revealing everything you need to know and find. Yes, the “Ubisoft tower” mechanic is something that fans turned into a meme, but it worked in Far Cry 4 because it balanced it perfectly with exploring the environments. Add Ubisoft’s close attention to detail regarding Hindi culture, the significance of religious symbolism and its spoken language, and you have a product made out of passion and care for its subject matter. Simply put, Kyrat is an absolutely beautiful location filled with detail and personality that’s too often sidelined when discussions about Far Cry‘s best locations are brought up. 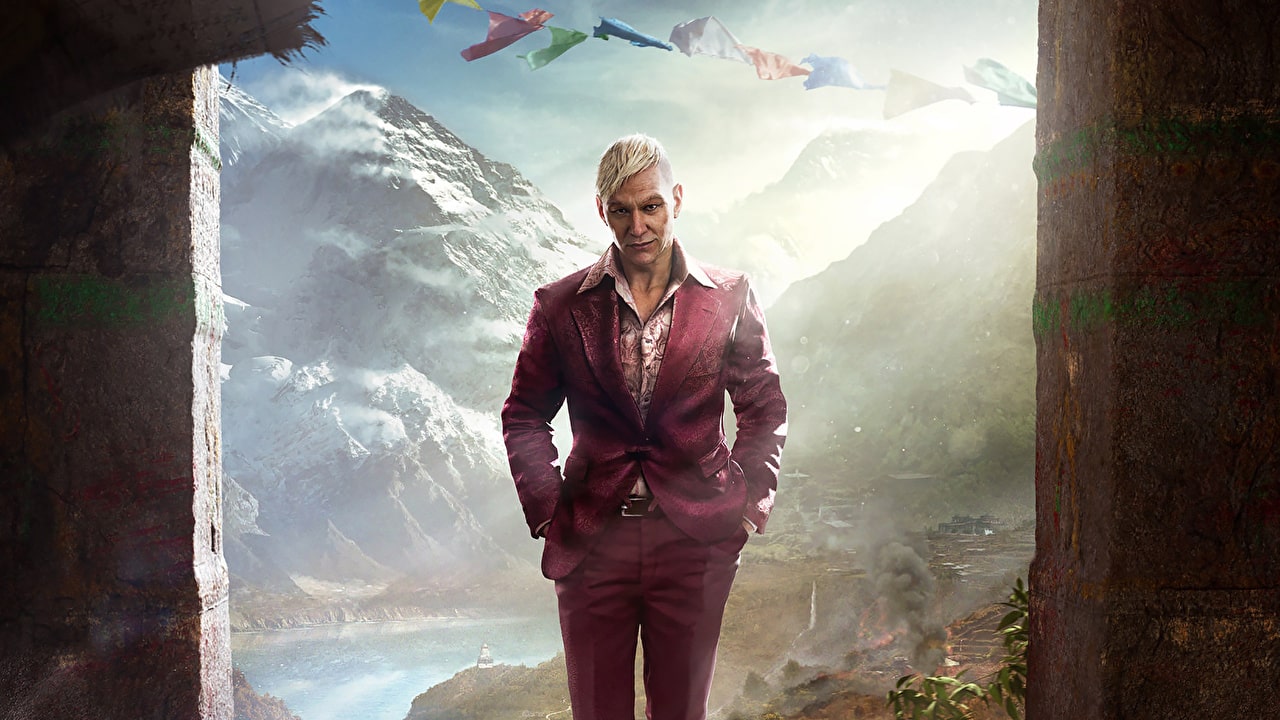 Now let’s talk about the second star of every Far Cry game: the villains. People often hold Far Cry 3‘s Vaas Montenegro up in high regard when talking about the series’ best antagonists, but I actually think it’s Pagan Min. Far Cry 4‘s opening hour immediately establishes the relationship between Pagan Min, Kyrat’s ruthless and charismatic dictator, and the player character Ajay Ghale, who’s on a personal mission in the region to scatter his mother’s ashes. Ubisoft wisely chooses to keep Pagan and Ajay’s true relationship a secret too. Pagan practically treats Ajay like a son, hinting at Pagan’s unknown personal history with his mother.

However, Pagan’s menace is also quickly established in this opening hour as he mercilessly slaughters one of his own men, right before complaining about getting blood on his shoes. His demeanour switches from cruel and unsympathetic to caring and kind as soon as he spots Ajay. This is an incredible set-up for a villain as it quickly raises more questions than answers but also makes players afraid of Pagan’s unpredictable and volatile nature. Your first instinct is to book it out of Pagan’s fortress as soon as the game begins because you’re not sure what to expect from him, and that’s marvellous character writing.

Of course, Pagan is brought to life by Troy Baker’s terrific performance, which I still think is his best (sorry, Joel fans). He is able to be intimidating, charming and caring all at once, and thanks to Baker’s slight mannerisms and vocal tones, you’re always left wondering if Pagan is as “good” of a guy he claims to be towards Ajay. Pagan’s only downfall is his lack of actual screen time in the game, but every time he enters a scene, he commands attention with a fittingly diabolical presence. 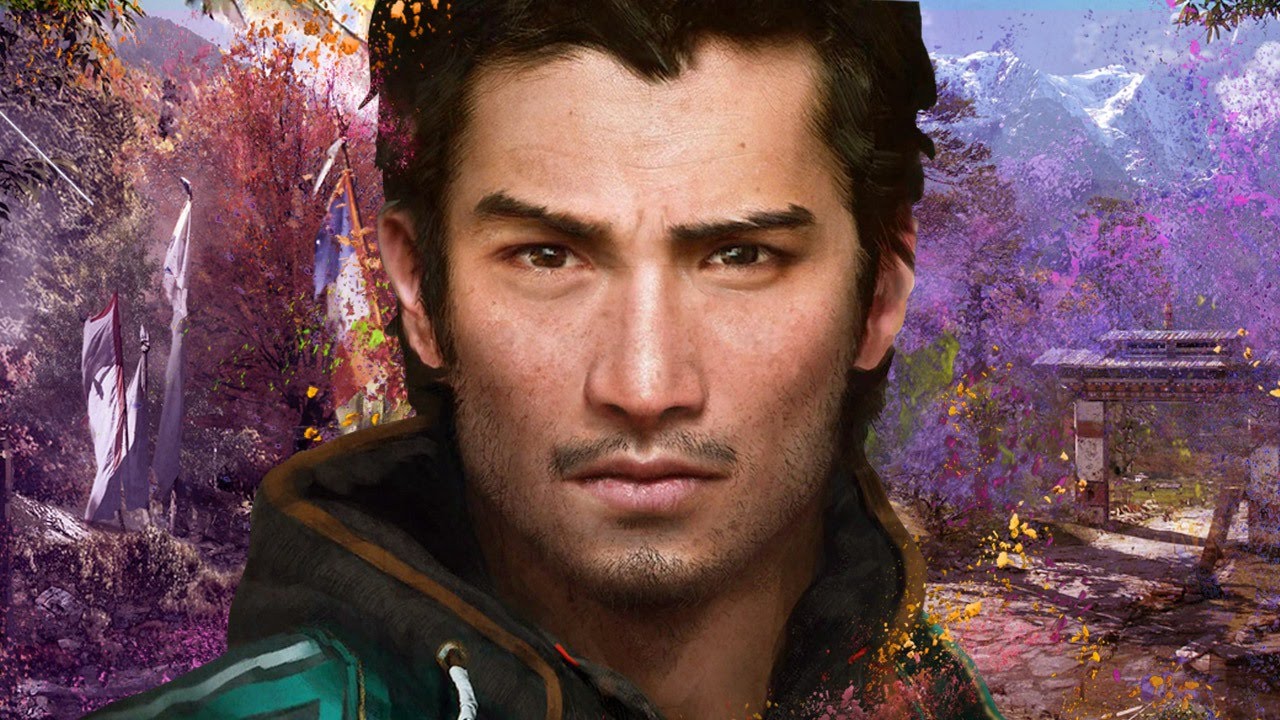 The Far Cry series isn’t exactly praised for its original storytelling, but it takes what has worked before and spruces it up with its staple bombastic action. In the case of Far Cry 4, you’re simply a visitor in Kyrat who wants to carry out a personal deed, but you’re very quickly swept up in a civil war brewing between some rebellious factions and Pagan’s own tyrannical regime. Ajay Ghale is not as good of a protagonist as Jason Brody since he’s a bit of a blank canvas for players to project themselves onto, though his connection with Pagan and surprising history is what gives his character plenty of depth beyond your average action hero.

Throughout the story, you explore more aspects of Ajay’s life as well as Pagan’s, making for some interesting theories and speculations. Far Cry 4 never gives you all the answers you need though, and that’s fine. It hands you a weapon, points you in a direction, and from there, it’s entirely up to you to unravel the narrative at your own pace. The story is not the focal point of the game, but it has just enough depth in its side characters to make you care. The leaders of the civil factions, Sabal and Amita, have opposing values that sits at the heart of their conflict, and it’s up to the player to choose sides throughout the game. Granted, neither is the “right” or “good” side as they both come with severe repercussions, but that’s the point. There’s no morally correct choice, and that works to Far Cry 4‘s advantage. 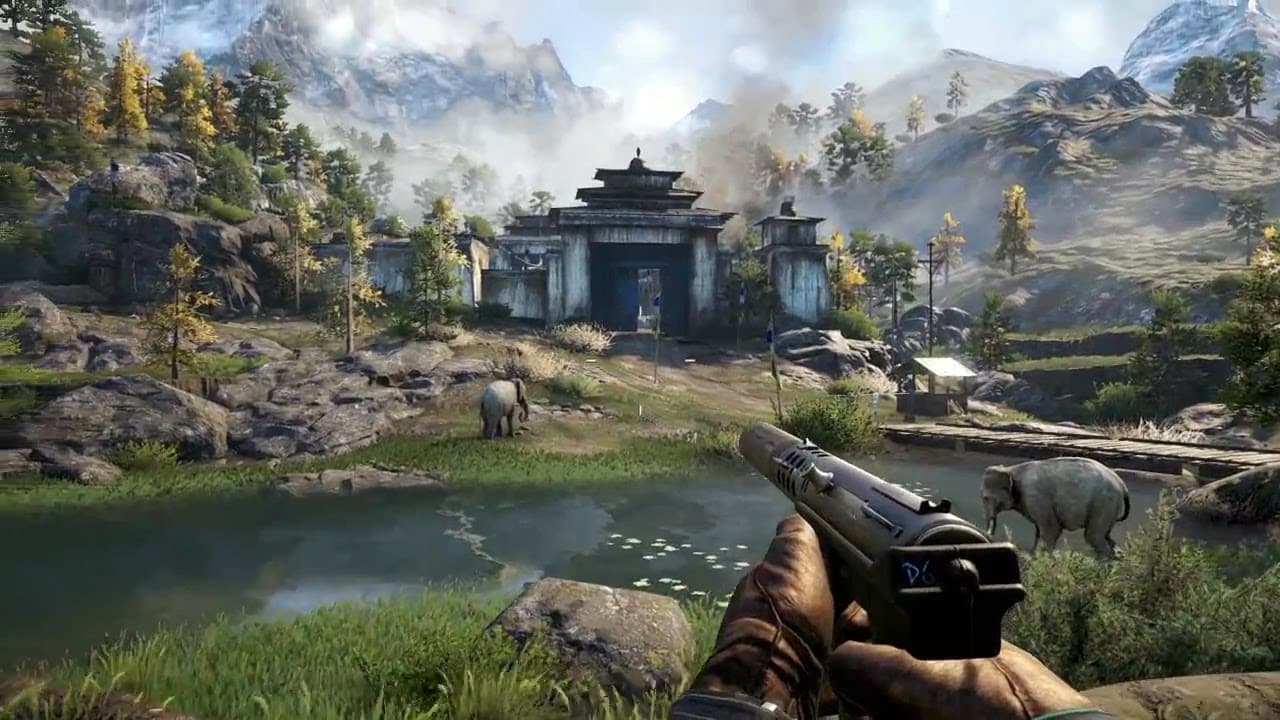 Far Cry 4 is more Far Cry – something I’m sure many have heard time and time again about each new entry. However, Far Cry 4 seems to nail down the core identity of the series better than the rest. It may still feel familiar to Far Cry 3 in some aspects, but the smaller additions paint a grander picture. For example, you can toss bait into enemy camps to attract predators roaming the area, so you can sit back and watch comedy ensue. Want to ride an elephant into combat with a rocket launcher? You got it. Want to battle indestructible honey badgers? It’s crazy, but it’s all there. The newly introduced wingsuit serves as both a stylish new way to zip around the map in the air, and also highlights the game’s great sense of verticality. You aren’t just exploring dense tropical jungles, but scaling high towers, mountains and cliffs which all have scenic jumping points for the wingsuit to feel like the optimal mode of transport.

More importantly, you can use the wingsuit to glide directly into enemy territory. Whether you’re the silent type that would rather use a sniper rifle, or prefer the good old-fashioned method of going in guns blazing, Far Cry has excelled in giving players numerous ways to approach any encounter. Far Cry 4 is the best example of how this level of freedom works to elevate the open-world experience. The icing on the cake is just how satisfying combat feels. The bow is easily my favourite weapon in the game as it feels and plays like how a killer hunting bow should, and makes for a stellar alternative to the sniper rifle. Guns still have a terrific kick to them, and the explosions are easily still the best in the franchise.

Far Cry 4 arguably retreads familiar gameplay patterns as Far Cry 3, but considering how well-received its predecessor was, Ubisoft simply took the formula and ran with it while introducing welcomed quality of life improvements as well as new additions to make the experience stand on its own two feet. For all its improvements, Ubisoft also finely tuned its gameplay that plays into the series’ greatest strengths.

Class of Its Own 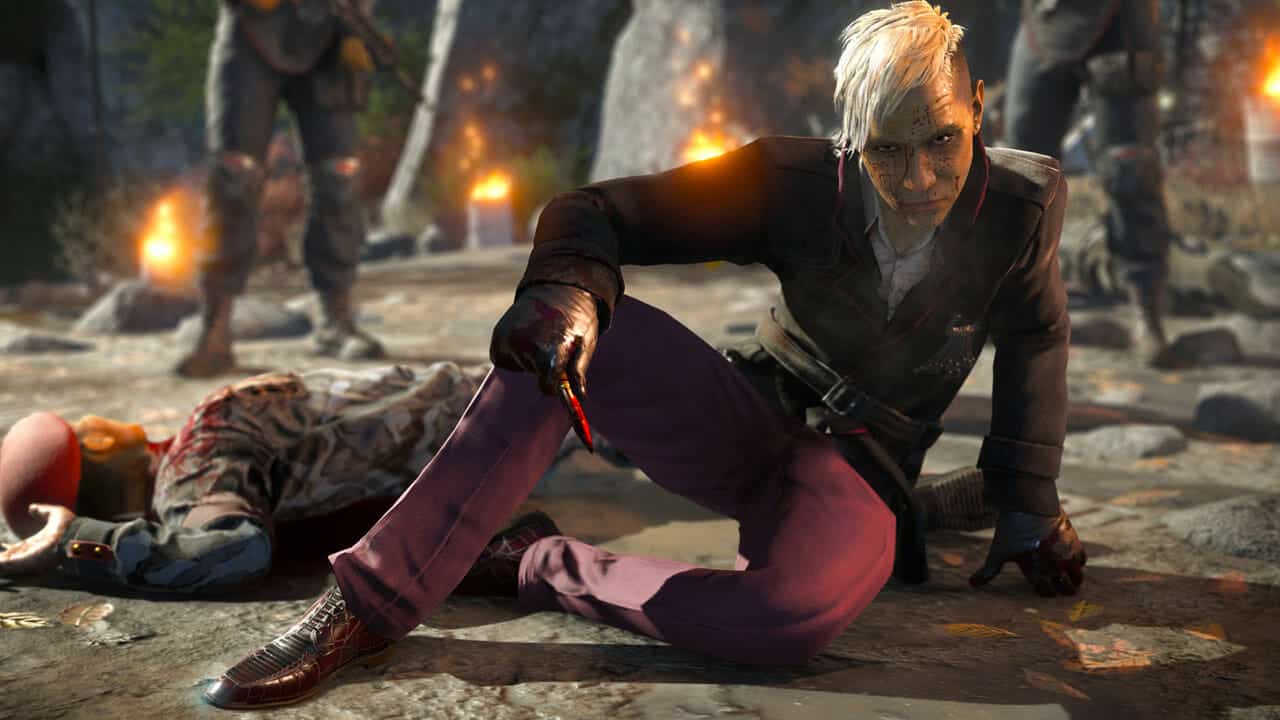 Far Cry 4 is not a perfect game, and it’s not a perfect Far Cry experience either – but it is a phenomenal one. Fans will forever debate the fourth instalments true merits, and most tend to agree that the third did it better. In some cases, it did. However, when taken as a whole, I can’t help but appreciate Far Cry 4 for what it does just right for me personally. Thanks to a world-class open world in Kyrat, an absurdly addictive sense of fun and progression, and a defining villain in Pagan Min, Far Cry 4 hits all the right notes for what’s important to me in gaming: immersion, fun and being at the whim of a creative endeavour that oozes passion – a passion that may have lost its way since Far Cry 4 and has never really found its way back.