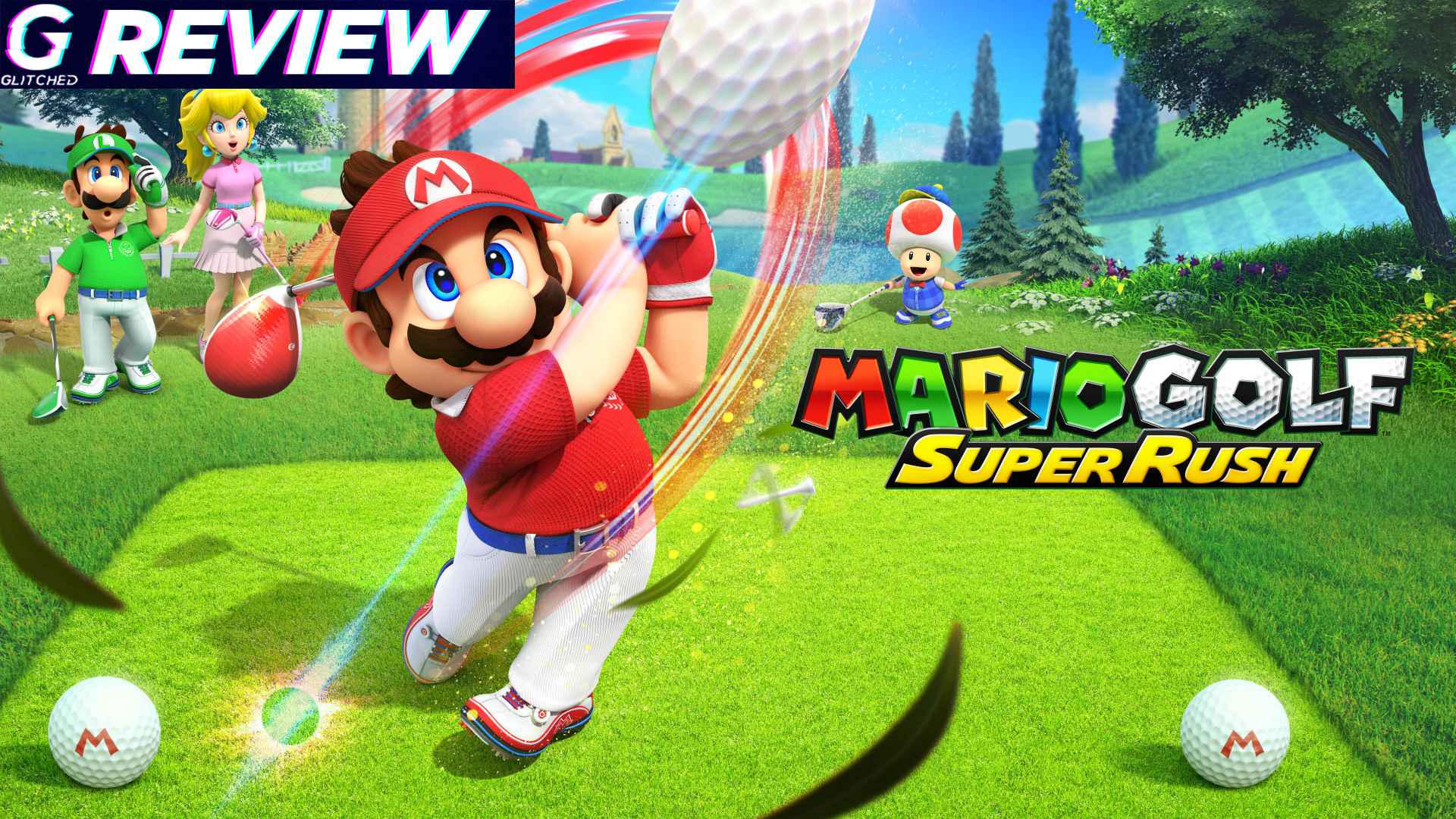 Secretly I am quite a golf fanatic. I am not talking about games like PGA Tour, which I still enjoy. Rather, I absolutely love arcade golf games like Everybody’s Golf. There’s something about getting lost in the game on a set of 9 holes for a few minutes that just gets me. To be honest, it is one of the only sports out there that has an accessible, casual game for users to enjoy. While I sit patiently for Sony to release the PS5 version of Everybody’s Golf (we know it is coming), Mario Golf Super Rush is here to scratch that itch and it is quite an enjoyable game.

Mario Golf Super Rush is sort of like the Mario Kart of golf games. It brings together all the iconic Super Mario Bros characters into one package and sets them against each other on various golf courses inspired by the most memorable locations in the series. This meant I was able to tee off as Pauline (yes, a strange addition to the game) on Balmy Dunes, the desert location in the Mushroom Kingdom. The game also boasts quite a handful of ways to play that makes this package feel a lot meatier than I thought it would be.

For starters, there’s a big emphasis put on the game’s single-player modes which is great. The Solo Play includes challenge modes that had me hitting a set number of shots while getting my ball in the hole across any of the various greens in one playthrough. The same can be said for Time Attack that was very similar to Score Attack. Here, I could do the same thing but as fast as possible. These modes also act as a great way to experience the courses without having to try and compete against your family and look like a complete noob while you’re at it.

Then there’s Golf Adventure which acts as the game’s main story campaign. Honestly, I was not expecting this mode to be so great and it completely blew me away. Somehow, Nintendo managed to beat all sports game’s campaign out there including FIFA and NBA. In its first attempt too. Gold Adventure saw my Mii run around an open-world like hub, participating in golf matches, meeting new characters, buying cool gear that affected my stats and gameplay. All while trying to get up the ranks and become the best golf player around. 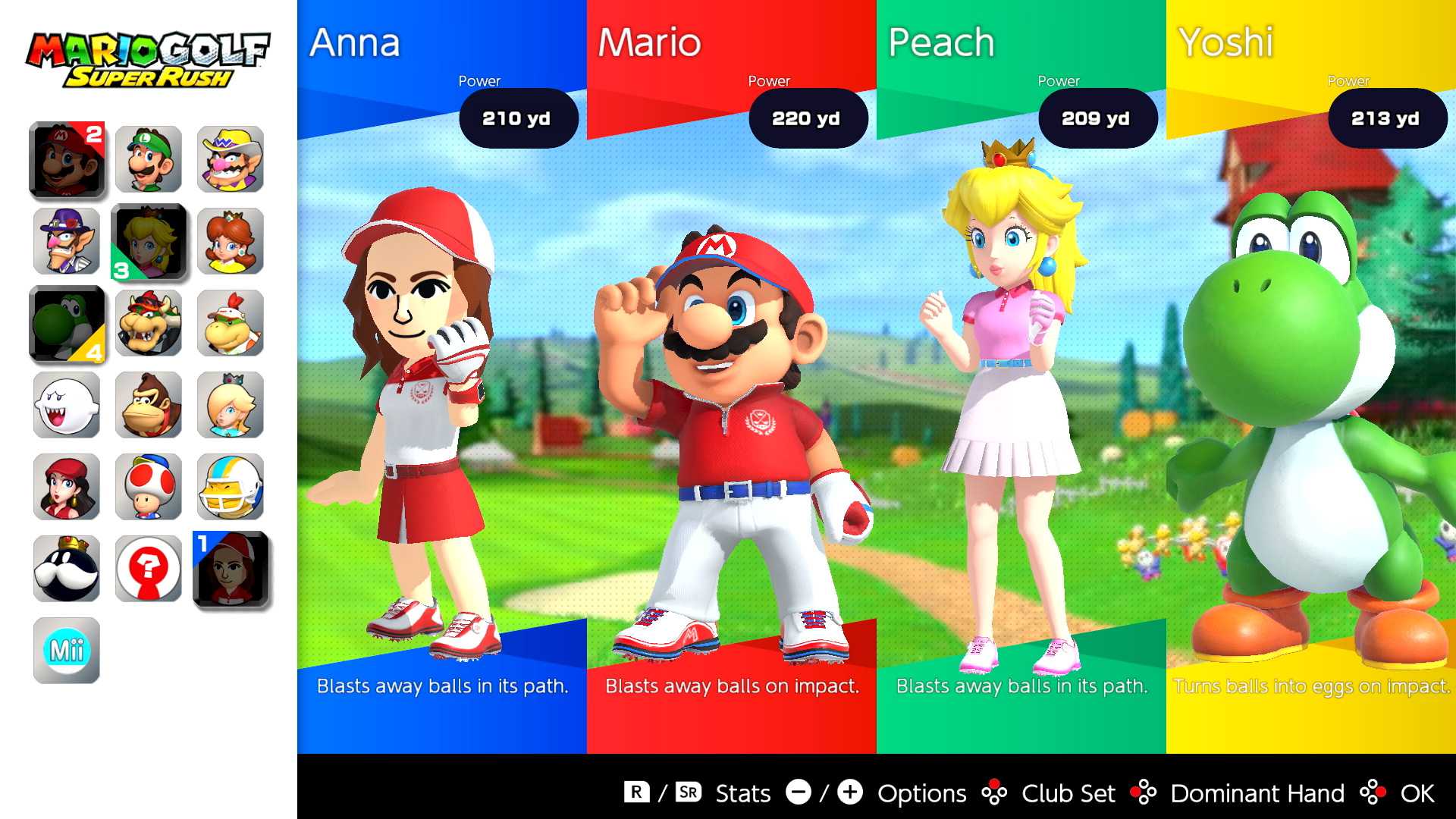 But Golf Adventure is more than just a linear “play one match and move on” sorta campaign. The story mode is actually quite entertaining and packed some unique match elements in it too. These match types mixed up the traditional 18-hole gameplay by adding spins to the recipe. XC Golf, for example, let me run about the course hitting my ball into any of the available holes under a certain stroke limit.

Think of open-world golf. There were six holes around me and the path I chose to reach each one, and the order I chose to do it in, all determined how well I did in the match. I had to get this done in 20 shots so I had to be careful and plan my movements correctly. These stages also included cool mechanics that helped me out. One was a wind funnel that kicked my ball into the air and helped me get it atop a mountain ledge. I could also then run into it and get whisked upwards to chase my shot. 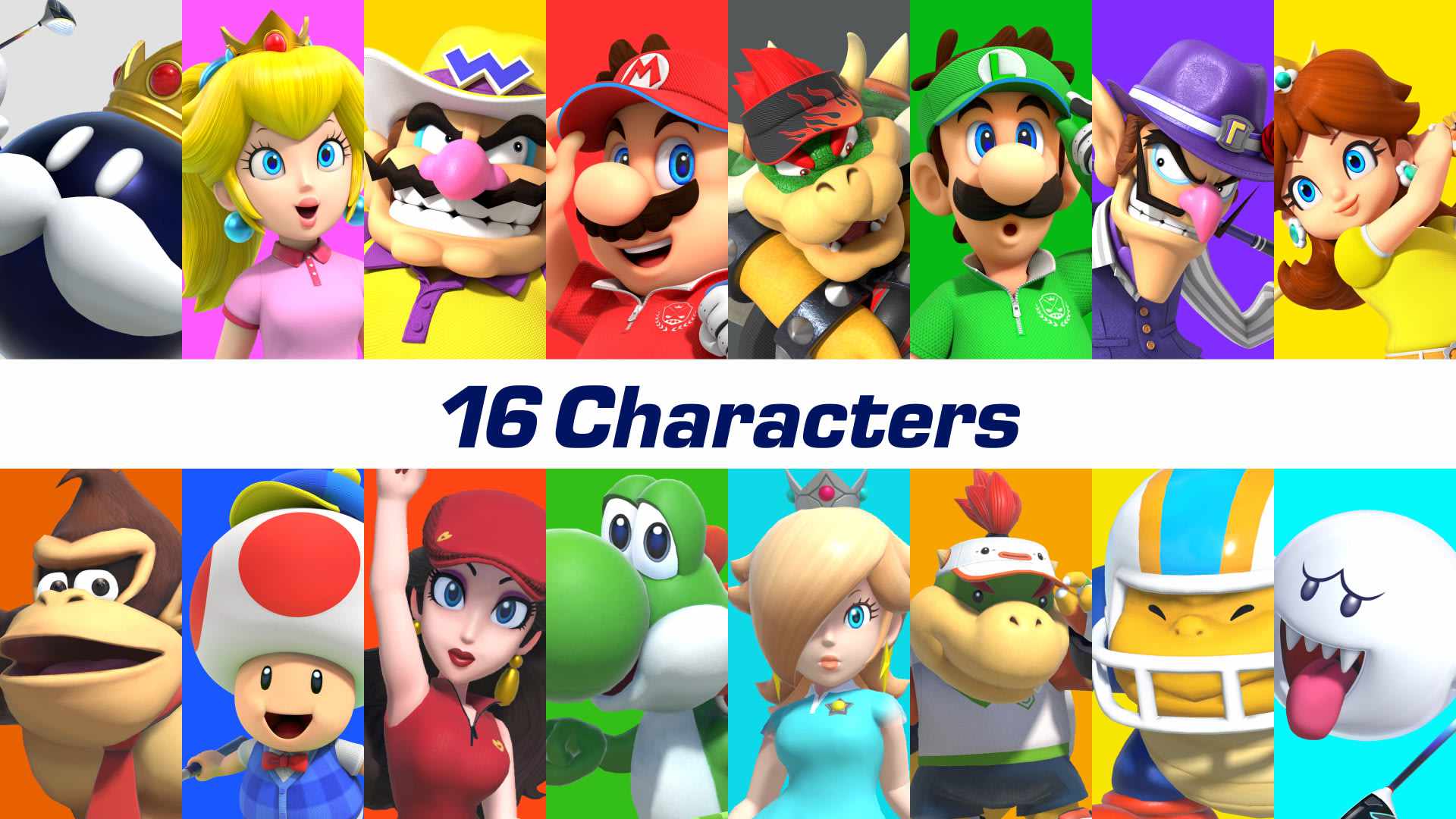 The Adventure Golf really made me feel like I was no one trying to become someone. In the early parts of the mode, I even heard rumours that the champions were playing in the matches I was participating in. I saw these champions, who were Bowser and Mario and I felt intimidated by them. Even though I did not see them in my matches until well into the campaign, it was cool to know they were also participating in the matches. Felt like a fanboy for a bit.

Adventure Golf also has its own stats system where I could choose how to grow my Mii depending on my play style. After matches, I was able to spec him out with skill points and increase his power, curve shots, stamina and more. There’s also a cool gear system that let me buy new golf clubs and outfits that all packed unique perks. I could then also switch to them when going into new matches all depending on the course type. 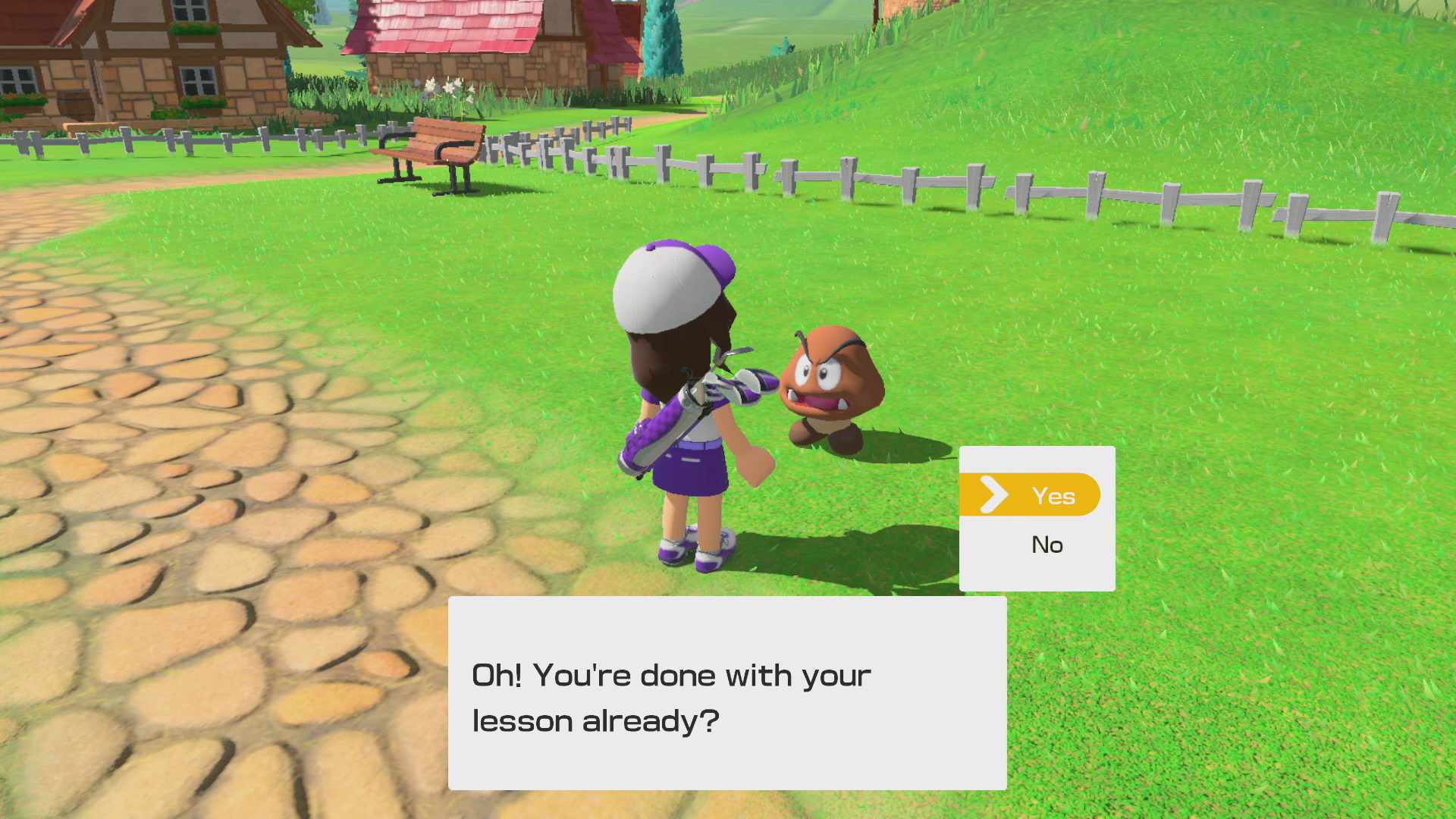 For a Mario Golf game, Adventure Golf was crazy fun and quite impressive. Playing through it also unlocked new content for the game such as new courses. However, you can also unlock this content by simply playing 18 holes on each course outside of the Adventure Golf mode. Not to mention that this mode is a great way to learn the game’s features. Every new course came with a robust tutorial on how to hit a ball and curve it, how to putt, get your ball out of the sand bunker and more.

After the campaign, I was confident in my skills in the game. Mario Golf Super Rush is also not incredibly hard to master either. If you have played a golf game, you’ll get this down within a few courses. You have the usual things to worry about such as wind and terrain angles. Then there’s the putting and timing of your shot. It is pretty basic when it comes to the general gameplay. 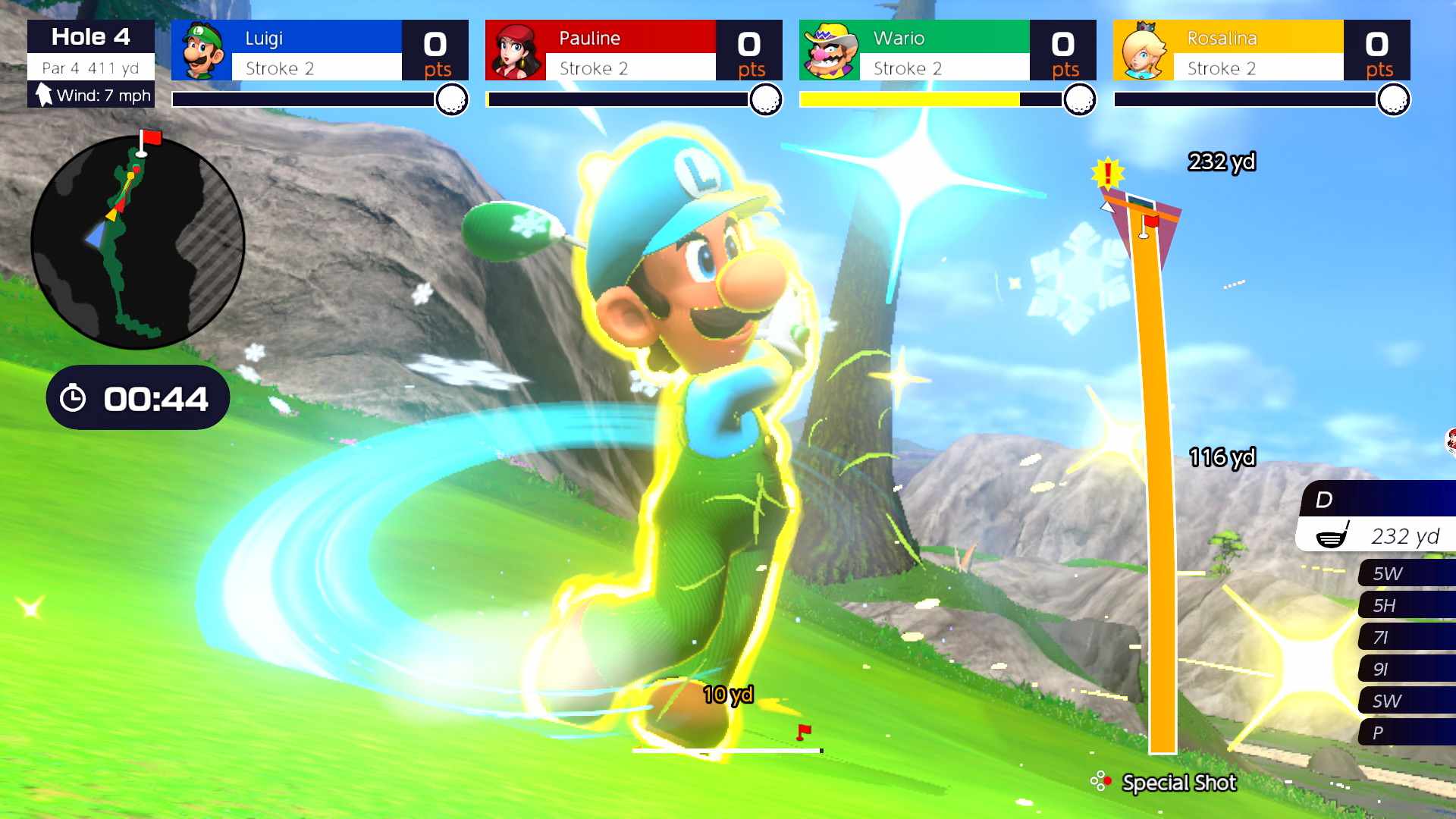 There are some unique skillsets to each of the main characters that make the game as “Mario” as possible. Every character comes with two skills. You get your Special Shot and Special Dash. The shot is used to do different things when you hit the ball depending on the character. Mario sees the ball slam down and knocks other balls out of the radius with a glowing ring with his Super Star Strike. Luigi, on the other hand, freezes the ground around the ball when it lands.

Yoshi, being egg obsessed, turns all the balls into eggs making them much harder to control and hit. They also look pretty cool when they are pulled off. There was something satisfying about seeing Bowser use his Meteor Strike to blast balls away. The same is said for the Super Dash. You see, in Mario Golf Super Rush, some of the modes let you control the character and dash across the course to where your ball lands. However, most of the time these modes rely on speed and time. This means slowing your opponent down is key. 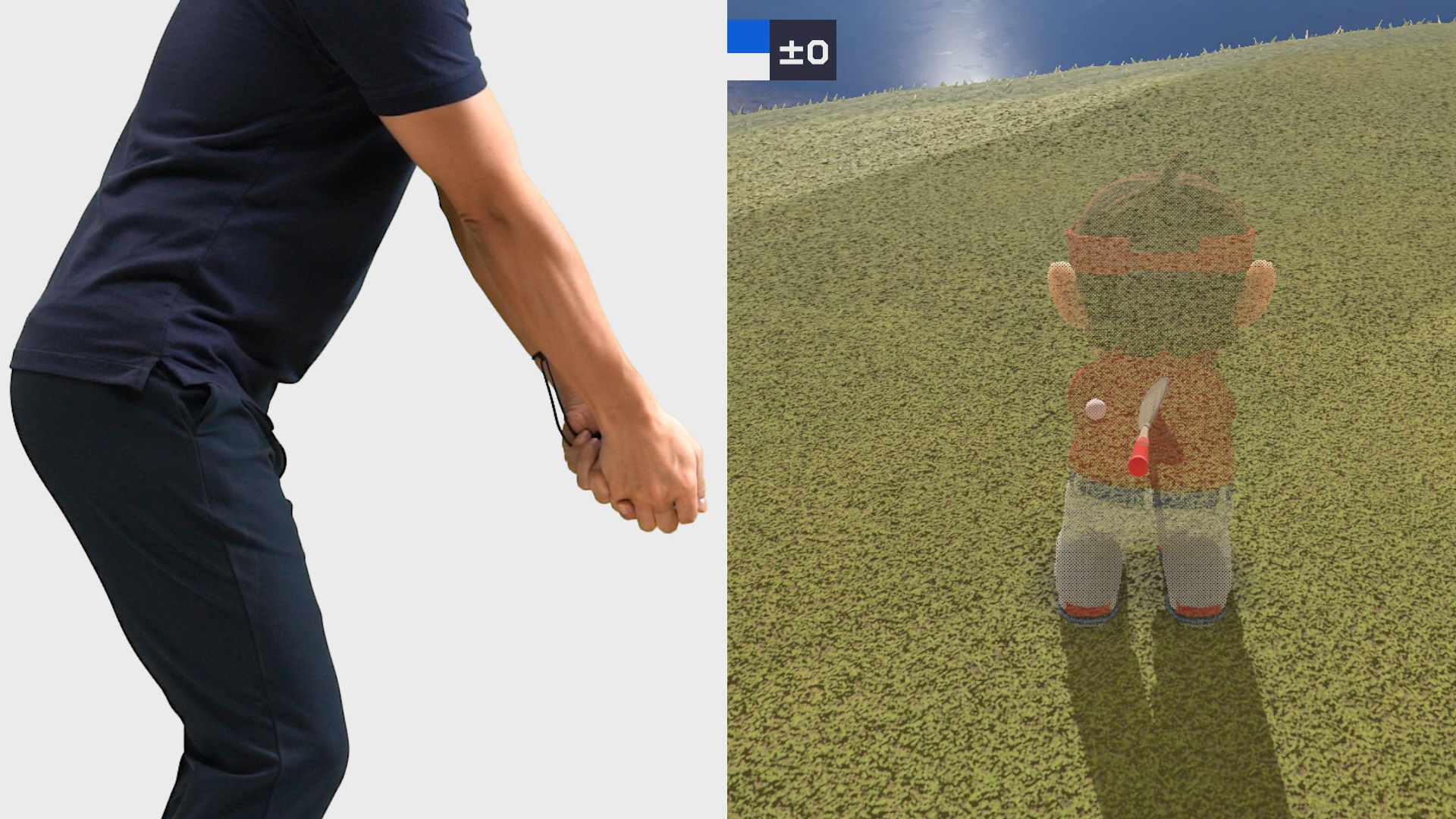 Using the Super Dash, the characters can bash into other opponents to knock them back slowing them down. It is annoying at times but feels great when you do it to another player. As I said, these skills make the game feel as Mario as possible.

Everything ties together when you enter the crazy Battle Golf mode. Here, all characters, or players if you’re playing online, tee off at the same spot and the first player to sink a set number of balls wins. This means everyone is fighting over all the holes in the stadium at once. Using all the Super Dash Skills to knock you down and all the Super Shot skills to move your ball out of the way too. 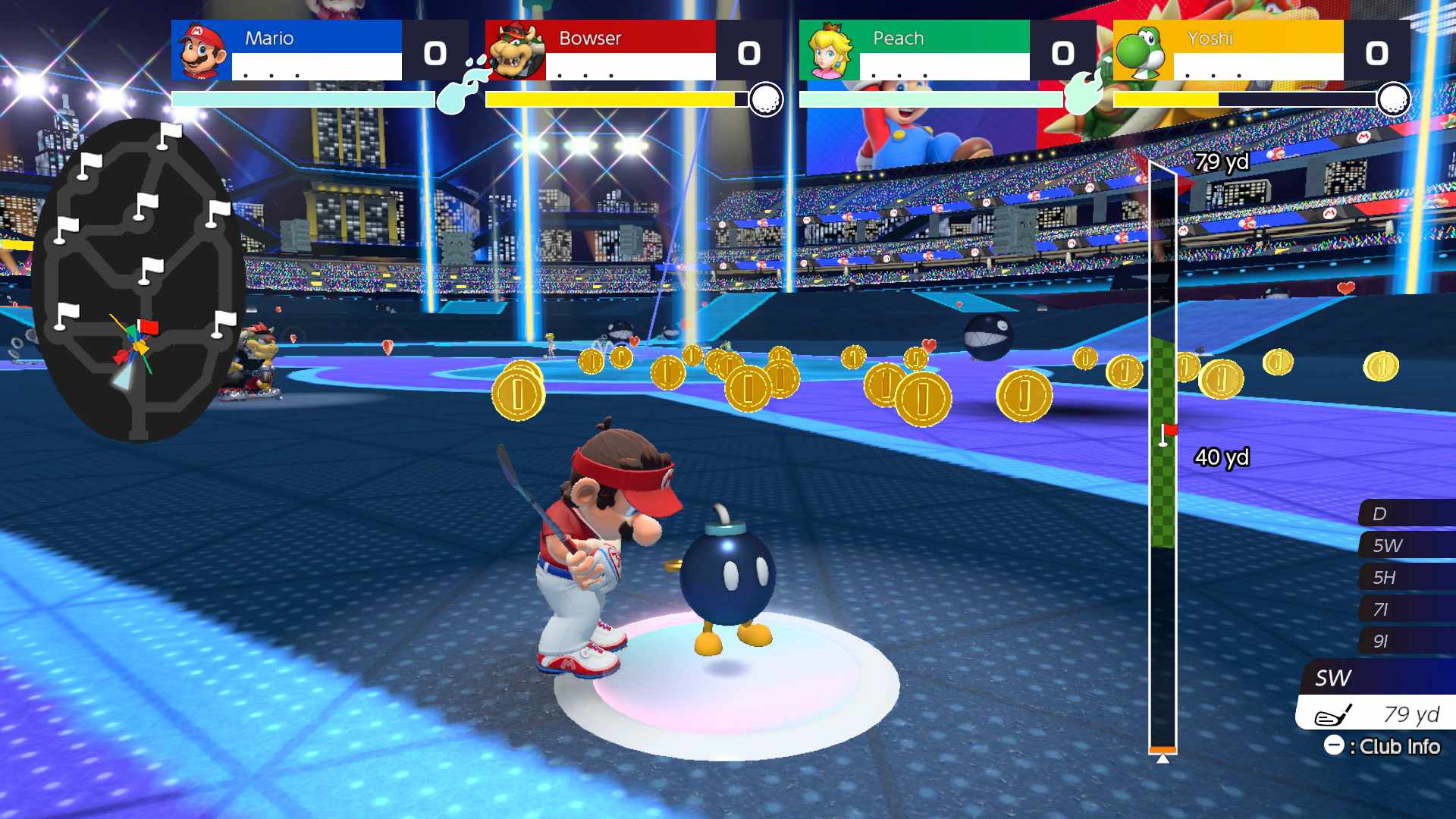 It can be a complete madness at times, to be honest, and can take a while to get used to. PvP combat golf? Who would have thought? While I enjoyed my time with Battle Golf, I could not help but feel that it feels too clumsy. Using a Super Dash would often shoot me off a hill and you can’t climb back up a slope. I had to go all the way around to a lower slope to get back on track and I had no dash left either. It just gets frustrating.

This sort of mode is also not playable with motion controls either as it just gets a little bit too much to handle. Imagine having to focus on this madness of everyone knocking you around while gripping your shot and trying to hit your ball while dashing over ledges and rushing for holes. It could be fun with local players but online with other people, it would just annoy me. 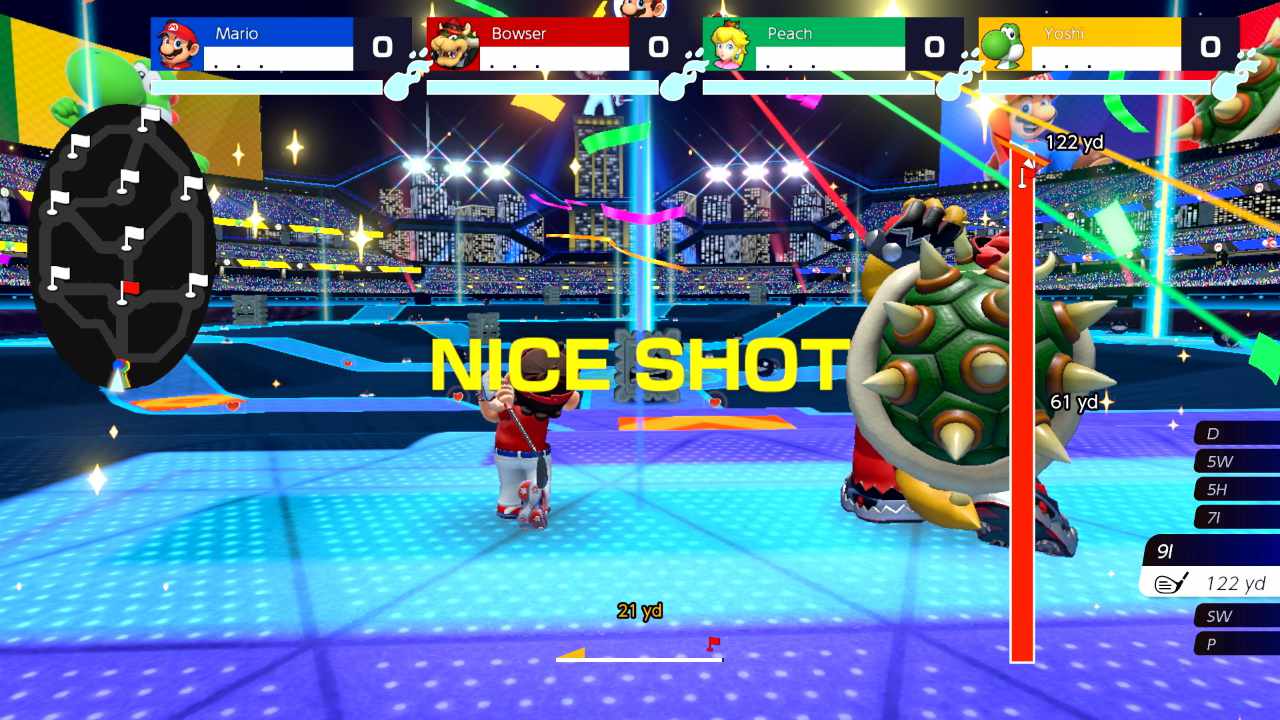 Mario Golf Super Rush is fun and even better with friends. It makes use of the Switch to provide motion controls that feel great. If I had to complain I would just say that the game is a bit shallow on content. With a handful of courses and 16 characters, I just wished there was more. The courses can get tiresome after a while and some characters don’t offer the same excitement as others. Like why is Pauline there? However, if you’re looking for a fun golf game to play solo or with friends, this is it.